Dan Swanö on STEEL, the Short-Lived Supergroup With Members of Opeth and Edge of Sanity

Producer legend Dan Swanö tells the story of Steel, the obscure heavy metal supergroup he formed with Opeth members during the recording of their Morningrise LP. 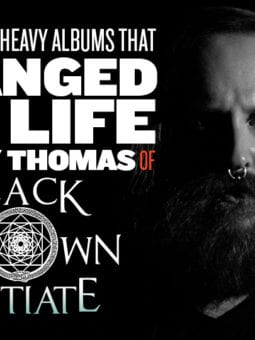 Decibel Meter: An Opethian Demon of the Fall

Whether you’re a death devotee or prog purist, this month’s seasonally-and-topically-appropriate Decibel Meter has some titles for you. Enter an eternal autumn of moors and misty fields, walk through blackwater parks of rain without end, and look to the October rust as night shades descend. We have a limited number of advance copies of the November issue of Decibel, featuring a flexi disc with an exclusive new previously unreleased track from Opeth, available now. Don’t blow it. Get your deluxe Decibel subscription by September 4 to obtain this HIGHLY LIMITED flexi disc single from legendary Swedes Opeth! We have a limited number of advance copies of the 15th anniversary issue of Decibel, featuring a flexi disc with an exclusive new track from Gatecreeper, available now. Don’t blow it. July 4th Has Ended. Make Sure Your Decibel Subscription Hasn’t!

Is YOUR Decibel Subscription Current? We’ve got awesome new Hall of Fame pieces, cover stories and collectable flexi discs on the way. Don’t miss out! Fallow Heart: Opeth and a Meditation on Hero Worship Decibel Contributor Roundtable: What band have you seen most live?

Decibel contributors share the bands they’ve seen on stage most, from sludge icons Eyehategod to metal juggernauts Lamb of God. Paul “Hammy” Halmshaw released some of the best extreme metal of the past three decades via Peaceville Records. Now he delivers a blow-by-blow account of how it happened in his first book. Bloodbath Announce New Album, “The Arrow of Satan is Drawn” Happy Valentine’s Day from Decibel. We like you like you, so we made you a playlist of metal love songs — light on the power ballads.

Spells And Schedules, A Q&A With Opeth’s Mikael Åkerfeldt

Let’s put it this way: Opeth now aren’t the Opeth of the mid-’90s or the mid-’00s. Older, wiser, better musicians, and better businessmen, Opeth, namely frontman/songwriter/elder statesman Mikael Åkerfeldt, have also changed their sound, if only to equal the bands Åkerfeldt admired as far back as we can all remember. Actually, the change isn’t new. The change dates back to 2011’s often misunderstood, but nonetheless incredible Heritage record, when Opeth closed the chapter on death metal and opened a new one on dark, progressive hard rock.

Top 10 Music For Nations Releases Of All Time

After 21 years of housing some of the finest metal acts known to mankind, British label Music For Nations closed shop in 2004. The label was folded in Sony Entertainment’s Zomba Record Group and mothballed until last year when Sony rekindled the legendary label’s fire.  So, we’re celebrating with an essential Top 10.

REVIEW: The Book Of Opeth

Is The Book of Opeth essentially a glorified biography with slightly more detail than what used to be on Opeth‘s website? Decibel reviews. For years, Opeth toiled in relative obscurity. Caged to Candlelight Records for three fantastic albums and Peaceville for one stupendous full-length, the Stockholmites’ import-only status could’ve continued had Opeth’s new home, Music for Nations, not been a label proper.

A meeting of minds between Opeth’s big chief Mikael Åkerfeldt and Porcupine Tree’s Steven Wilson, Storm Corrosion is a down-beat, atmospheric heavyweight that is the sort of Weird Science fantasy wet dream prog-heads have been jonesing for ever since Wilson took over production duties on Opeth’s groundbreaking Blackwater Park. Their eponymous debut eschews any of…

It’s Time to Go Back to School

We, the working class, salute the fine young individuals who are bidding farewell to another summer and returning to academia. To help you get through another grueling year of homework, idiotic teachers, standardized tests, and the realization that there are no jobs out here once you graduate, the Deciblog has carefully constructed a series of…