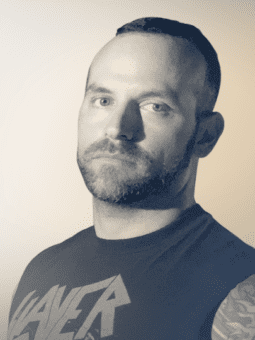 Gruesome and Filter drummers get together to break the stigma on mental illness. The Haunt of Harvey: Matt Harvey’s Top Five Horror Comics of All Time

To celebrate the release of the new Exhumed/Gruesome split 10-inch, Twisted Horror, we caught up with Matt Harvey to find out his top five horror comics of all time. ONE WEEK AWAY From Metal & Beer Fest: Los Angeles. Got Tickets?

A weekend of Carcass, Possessed, Nails, Vio-lence, Gruesome, Gatecreeper, Schammasch and more along with a dozen metal-friendly craft breweries is nearly upon us! Decibel Magazine Metal & Beer Fest: Los Angeles kicks off is just over two weeks, which means it’s time to finalize travel plans and get your tickets. To aid in your planning, weekend set times are now available. Old-school death metal revivalist Gruesome have been added to the lineup of Decibel Magazine Metal & Beer Fest: Los Angeles, taking place on December 13-14 at the Observatory in Santa Ana, CA. Judas Priest return to the cover of Decibel with an decade-in-the-making Hall of Fame story of their Stained Class album. We caught up with Pounder’s Matt Harvey to talk about how his new trad metal project is really more similar to his extreme metal bands than you might think. Matt Harvey joins forces with acclaimed artist Kelly Williams (The Cabinet, Eerie) for the deliciously demented banshee-centered graphic novel romp, Howl — and the velocity and transgressive brutality the Exhumed/Gruesome vocalist/guitarist delivers in this new realm is totally what horror-obsessed metalheads would hope for from the guy behind Gore Metal, Slaughtercult, and Necrocracy.

Harvey was kind enough to give Decibel the inside scoop on the comic — the second volume in Williams’ multi-author series The Dark — out on Halloween via Alterna Comics.

Exhumed, Ghoul and Arcana 13 members weigh in with horror and slasher flick favorites in honor of today’s metal “holiday.”

“Forces of Death,” from upcoming Scream Bloody Gore/demos-inspired Dimensions of Horror, is the Deathly metal you need in your day. Immediately.

Even though Gruesome “pays homage to death metal’s most celebrated founding American acts, Death” (according to a press release), the band’s tastes in the genre don’t stop and end there.  That shouldn’t come as much of a surprise given that the group features members of Exhumed (Deci-fav Matt Harvey), Possessed, Malevolent Creation and Derketa.  So while Savage Land, the quartet’s debut, may sound very Schuldiner-esque, guitarist Dan Gonzalez was kind enough to tell us about some other death metal bands.

Last week, we brought you an exclusive stream of Savage Land, the forthcoming debut LP from Death-worshipping supergroup Gruesome. This week, vocalist/guitarist Matt Harvey (Exhumed, Dekapitator, the “Death to All” tour) breaks down the inspiration for each song and provides some hilarious insight on what it’s like to write and record music that’s delightfully derivative.

Metal has seen its fair share of worship bands over the years (see Black Sabbath’s direct line to every doom band ever), but it’s rare that one comes along whose sole purpose is to pay homage to one specific group and their highly specific style. Enter Gruesome, a bonafide supergroup (members of Exhumed, Malevolent Creation,…