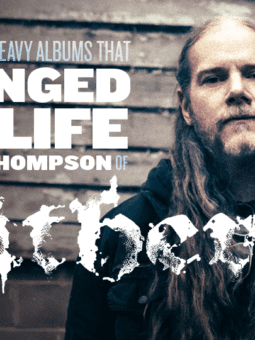 To celebrate the release of Withered‘s new LP, Verloren, we caught up with vocalist/guitarist Mike Thompson to find out what five heavy albums changed his life. Going back to Into the Grave, Sweden’s terribly heavy death metal outfit Grave had few peers. Now, some many moons later, the Stockholmites still have few peers on new album, Out Of Respect For The Dead. Built on solid death metal foundation (no question), Grave’s new album pummels, punishes, and putrefies, with tracks such as “Mass Grave Mass”, “Flesh Before My Eyes”, and “Trail of Ungodly Trades” feeling freshly peeled off the skin of a recently-dead corpse. We tracked down frontman and original member Ola Lindgren to see what makes Grave tick after decades of cemetery work and mausoleum repair.

** For the better part of our lifetime, Swedish death metallers Grave have dominated the landscape. They released seminal album, Into the Grave, ushering a new wave of heaviness not found in their Stockholm peers. They released Soulless, an album that combined the brutality of death metal with an unheard of groove. When Grave went on hiatus in 1997, the world had thought they could leave death metal to the next generation. The world was wrong. The Swedes returned in 2002, with Back from the Grave and have since then pounded out death metal albums of the highest quality with the best old-school mentality. So, let’s respect Grave. And let’s cheer on the savagery that is new album Out of Respect for the Dead.

A Very Heavy Halloween II: Into the Darkness, Into the Grave

Today on a very special Halloween edition of Into the Depths we’ll be speaking with Ola Lindgren about the humble Baltic Sea origins of his death thrash powerhouse Grave, its various and sundry triumphs, trials, and tribulations, what it was like to watch the nascent Swedish death metal scene rise in real-time, and the band’s… It’s obvious that we have quite a lot of love for Grave around these parts. Don’t believe me? Just check out Greg Moffitt’s review or Jonathan Horsley’s profile in our September and October issues, respectively. While the Swedish death metallers just released their new album Endless Procession Of Souls last week, guitarist/vocalist Ola Lindgren had…

STREAMING: Grave “Passion of the Weak”

Grave. Twenty-four years young today. What keeps Swedish death metal bands alive—when by all rights they should be, uh, dead—for so long? Is it the bone-cold water? Dunno, but we’ve used the phrase before to cliched ends of sanity. Is it the clean crisp Scandinavian air? Yeah, used that cliche too. Maybe it’s the fetid…