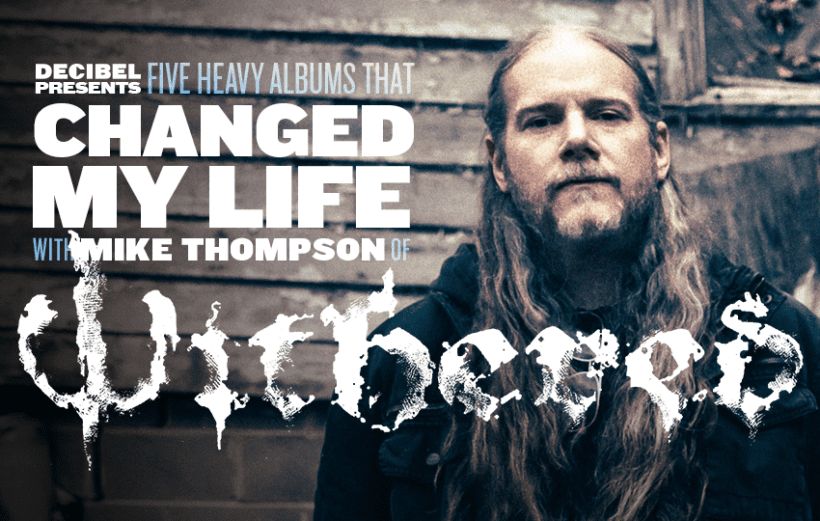 “Jesus fucking Christ… ‘Top five albums’?! I mean, what is this need to over-compartmentalize something as invaluable as my artistic influence into some cute bait-laden contrivance?” begins our man Mike Thompson, also known as guitarist/vocalist for Atlanta-based crusted-over blackened doom downers Withered, who are releasing their fifth album, Verloren, tomorrow on Season of Mist Records. “What does it even mean amongst the meandering throes and gestures we all spew daily in some futile attempt to give anything meaning? Hah! Just yankin’ your… something. I’m actually super excited to do this with the homies at Decibel mag because I have and always will adore truly heavy music. I’m a huge album lover (versus being a band lover, per se). Albums are where it’s at, and anyone close to me knows that I live and die by my loyalty to certain albums. Limiting to five is tough after 32 years of the heavy stuff so I’ll focus on the first five albums that were paradigm shifting for me and gave me a big kick in the ass I needed as a kid. Well, at least until dB inevitably invites me back for ‘The second five heavy albums that you eat noodles to’ or whatever. Anyway, here we go…” Whew, what a wild beast this record is for me. It’s pretty strange production-wise—so ballsy, so don’t-give-a-fucky. I’ve spun it probably 20,000 or more times in my life. I still get goosebumps when I hear the “Blackened” intro come on unexpectedly at a bar or friend’s house. Our bassist, Rafay [Nabeel], even trolls me with it when I’m sitting at his bar.

I’ll admit that this one was mostly coincidental timing for me at an impressionable 12 years old. I was rocking a healthy diet of hair metal, thanks to my older sister, and just started to learn guitar. Still love hair metal but it was never MY music. I grew up in a relatively safe suburban existence with a good family so things were a bit passé for me overall. Especially when it came to music. I walked home from school one day, turned on MTV, and the “One” video was on. My mind was blown. It scared me, tantalized me, confused me, the works. I never knew music could be so powerful, purpose driven, intent ridden, and, in hindsight, so obstinate.

After growing up and taking in their whole catalog, it’s obvious they had demons and traumas that needed exorcising through this one. It’s really fucking mean and was their peak; they were willing to risk it all to make this one, massive, dark point. This is when I knew what I wanted to do with my life. Wake people the fuck up by knocking them on their asses. Not to mention how catchy so many of the riffs are; the song structure is sublime on so many songs. This is my riff-writing bible. Taught me how to never repeat a phrase exactly the same way more than twice without adding/changing the tail or freshening up in some way. This one always sweeps me off my feet into that darkened, overcast place that I first discovered as a gullible, unassuming pre-teen. A place where only I exist to revel in my traumas and my shadows. Oh man, there was a strange solid state electro sort of richness to albums in the late ’80s and ’90s. The industrial samples/intros and production on this record truly leverage the era in an exemplary way. This was my first real dose of a non-singing heavy vocal style and the d-beaty whirlwindery ol’ Sep brought to the table. This was an entirely different energy than described above. Like an atom bomb going off. Especially live, holy shit. The only time in my life I watched a packed venue of about 2,000 people ALL moshing simultaneously and “stage” diving off of 12-foot-tall PA speakers. Insane.

Musically, I got an entire new approach to guitar playing. The riffs, oh man. I’m a sucker for hooky mid-tempo riffs. I’ll never forget a certain Cajun guitarist walking up to me years ago after a Withered show and saying, “It’s all about the heavy riffs, bro,” then just walked away. Likely for a shot of Jager. He’s right. Riffs should punch you in the gut and stick to your brain. This album did it in an entirely new way for a 14-year-old me. My other biggest takeaway was Andreas Kisser’s lead style. Total chaos on the verge of falling apart whilst somehow delivering fantastic melodies that really ramped up the mood of the song. So many other leads are just that or entirely new riffs are written to support the lead and can even interrupt the vibe of a song. Fuck that. Ditch the ego, bring the heavy riffs… bro! This may be the best sounding death metal (rock?) album ever. It is the HM2 sound of all time for me and the first time I fell in love with a tone. Even more so, Nicke Andersson’s drum playing was like nothing I’ve ever heard on a metal album. Wow, it’s fantastic. Big toms, slappy kick, nothing like ’90s metal sounded like. It’s still a big drum tone reference for me when we’re recording. This showed me that metal was more malleable than I thought. It’s when I realized that the bands who really mattered in metal at that time were path cutters. Each had a unique sound and waved their respective flags proudly. Fuck jumping on bandwagons or aping someone’s sound/style. Such a lazy, spineless move. Have the guts to expose yourself and go down with the ship. Cut a path and inspire. That’s what an album should do.

Now, you sprinkle all this with all the (now confirmed) rumors about Nicke doing vocals, etc., it’s no wonder this album is a true standout. I’m still a huge fan of Mr. Andersson. The mono to stereo guitar break in “Sinners Bleed” before the pit-commanding slow oompa/upbeat snare part comes in still makes the hair on my neck stand up. Note to self: Withered should cover that song… YES! So excited to get to this one. One of my all-time favorite albums. Holy shit. It took a long time for me to warm up to traditional US death metal. Most of the Tampa stuff was so technical/sterile that I couldn’t connect with it. I want to hear pain and feel emotion in music. An old guitar-player friend of mine named Jason showed me this album one day and I was floored. The guitar tone was near perfect to me. It wasn’t HM2 but was sort of Swede-ish. More down to business, meaner, but with that HM2 meat and grunt.

Also, I’ve spoken before how Jörgen Sandström was always one of my favorite vocalists and a big influence on my vocals in Withered. I like the howling, long growls. It’s like a tortured moaning sometimes. That’s where the good stuff lies. And this was my first taste of more blatant anti-Christian subject matter. At 15 years old, it was much more taboo/shocking than these days and my first struggle with reconciling a contrarian ideal/perspective that threatened my assimilation into a social structure that contained everyone I loved. A decent little existential exercise. More importantly, I finally got to see Grave live in ’94 on their US Soulless tour. I was 17 and waited outside to meet them. It wasn’t hard because they weren’t very well known back then. I HAD to know how that tone was made. I met [guitarist] Ola [Lindgren], got my YNS cassette cover autographed by the band, he explained his tone setup, and it’s the basis for my tone in Withered today. This fucking record. THIS FUCKING RECORD! Wow, it’s a masterpiece. [Mastodon’s] Troy Sanders dragged me to see Neurosis play live at a big theater in Atlanta in, shit, 2000 or 2001 maybe, when they were touring for this album. The stage’s back wall is organ pipes from floor to ceiling (old church) and Neurosis was opening for Soulfly. That crowd was not really having much of Neurosis but it didn’t matter. It was like being knocked over by a tsunami of energy/force but staying suspended in the fall for the entire set. You didn’t hit the ground until they finished. I had checked them out several years earlier but it was too different, I was too young, I don’t know. I didn’t get it at the time. So glad Troy talked me into going. Jason Roeder became one of my biggest drumming influences and this album still is a master class in how to wield heavy music in a truly meaningful and spiritual way. It’s transcendent and, for me, finds a balance in everything they’ve done prior or since. I always revisit this one when I’m trying to recenter myself in the face of conceptualizing a new album. It puts my feet back on the ground and reminds of the point to all this. Move people, give them pause, challenge them to look at themselves. Fuck only five records. I just can’t do it. And I really hope Decibel prints this because this album is just as important as any of the above to me. When we formed Withered, our loose “concept” was “black metal Neurosis.” Little did I know that this rare gem was floating out there setting THE example. My only reference to black metal up until this was corpsepaint-laden Scandinavian stuff, which I love a lot of. But, some southern boys from Georgia trying to do something like that was quite comical in concept to me. So I/we delved into crustier black metal and one day, [former Withered guitarist/vocalist] Chris Freeman handed me this CD and said, “Lay in the dark and listen to this on headphones.” It blew me away and hollowed me out. It encourages an incredible sense of despair and forlornness that I hope to achieve on every Withered album. The intro to “Like Locusts” from our first album is a fairly obvious nod to the title track’s opening. After several years of searching, I finally found one of the rare LPs of this record on a jazz music forum and paid like $100 for it. It showed up slightly warped. No, it’s not for sale.

Okay, okay, I have to force myself to stop here. I have a few more that it’s killing me not to talk about but that’s not the deal, I guess. Maybe one day, I’ll get to talk about a friend finding a Slowly We Rot cassette in a ditch and giving it to me because “it really sucks” and I fell in love with it. Or how Melvin’s Houdini conjures magic, or Assück’s Anticapital boils my blood, or, or, or… Anyway, I hope this explains some of why Withered’s music seems so restless and my never-ending affection for traversing sub-genres recklessly. It’s all about blazing new paths while honoring those who came before. NOT ripping them off. If you’ve made it this far in the read, you likely have what it takes to spin a Withered album enough times to let it soak in for what it is. Cheers!