Judas Priest will hit the road without guitarist Glenn Tipton, but the band remains great in his absence. A History of the Times Black Metal was “Over,” Part I All in Your Head, Or Why Metal Musicians Shouldn’t Overreact to Negative Reviews

Every artist eventually faces a bad review of their work. But a very public reaction to that review invites even more negative criticism. Knowing Your Limits: Consistency vs. Experimentation

Watain’s upcoming album, “Trident Wolf Eclipse,” is a fantastic explosion of straightforward blackened death metal. This return to form is a good chance to think about why some bands do better experimenting, whereas others should stick to what they’re good at. Krieg’s Neill Jameson recounts the good and the not-so-good that occurred in 2017. An open internet is at stake with a new FCC vote. It could cripple the independent music industry. Find out what it means and what you can do. Prurient’s New Album is Too Long

Prurient will release Rainbow Mirror, a 3-hour long record. That record is too long. Why You Should Give the New Trivium Album a Chance

If the glorious new track, “Betrayer” is any indication, Trivium’s new album should be a chance for metalheads to revisit Florida’s metal heroes. The Devaluation of Opinion in Metal

Neill Jameson considers the importance of aesthetic and appearance in black metal in response to a controversial piece of album artwork. The Art of the Deals: On Promoters and Labels

Is there an offer that’s too good to be true from a record label in your otherwise empty inbox? Neill Jameson urges you to reconsider. What is the future of long-form music journalism?

Music journalism’s relationship to economic reality has always been shaky. Here are some ideas of where that relationship might need to go. Mocking depression seems to still be fair game, even in today’s ultra-sensitive climate. Stop it. Why Do You Really Care About Not-So-Grim Kim?

Our Neill Jameson doesn’t care about Kim Kardashian’s Morbid Angel shirt, but he is concerned about the aggressively stupid reactions to it. It shouldn’t take a tragedy like Chris Cornell’s suicide to make us focus on depression and metal illness. So, Your Record Got a Bad Review…

You put so much of yourself into the record that of course you’re crushed when someone dismisses it. It’s the most human reaction. If you had a new baby you couldn’t fathom someone typing on Facebook that “Eh, it doesn’t really do anything interesting and that goo goo ga ga junk is derivative of other, much cuter babies.” Angry About Bandcamp’s ACLU Donation? Then Delete Your Band’s Account

Neill Jameson provides a protest idea to any musician wounded by Bandcamp’s plans to donate all of this Friday’s earnings to the ACLU. Foreclosure of a Dream: Abandoning the Cult of the Presidency

Extreme metal has the unique ability to smash our romantic illusions about life and the world. It’s time to apply that same cold stoicism to executive power, no matter who’s President. When is a Band No Longer the Same Band?

If you know anything about Napalm Death you probably know this bit of trivia: the band contains no original members. While they are known for the revolutionary Scum album, not even their oldest current member played on it. So when it comes to people leaving, dying or being fired, when is a band no longer the same band? Why do Metal Videos Suck?

Throughout the decades of arguing over metal, there is one undeniable constant: metal videos are usually pretty dumb bullshit. Music Criticism Has Not Died. But It Must Transform

Music criticism, and the reviewing of musical pieces in general, is not obsolete. You’d be forgiven for thinking so, though. Never one to fart in a crowded elevator and leave, Neill Jameson returns to address some responses to his recent op-ed on crowdfunding in metal. 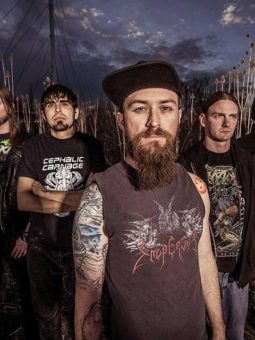 We Owe Each Other Nothing: Just Break Up

A metal band has launched a crowdfunding campaign, so fans can donate them a “living wage” in order to continue as band. Our Neill Jameson wonders how the fuck we got to this point. “No one even eggs houses anymore because they only want to buy cage free organic eggs and that shit’s expensive.” You bought the record. You wear the shirt. But does that mean you deserve an explanation from Nails about why they are on hiatus? Neill Jameson doesn’t think so. Our Neill Jameson thinks Metalsucks totally missed the point of Nails. Or maybe they’re just baiting you for clicks. Guest Commentary: Social Justice Warriors Aren’t a Problem in Metal. But Assholes Are. Decibel has been labeled Social Justice Warriors from the right. And attacked by actual SJWs from the left. Should everyone maybe just shut up for a second? An anti-fascist protester tear-gassed a Taake show to the benefit of absolutely no one.