It was only 15 minutes in 1991, but those 15 minutes changed extreme music history. Assück‘s debut album, Anticapital, is easily one of the best grindcore records of all time. It’s one of my favorite records of all time, and although Anticapital will most likely never make it into our Hall of Fame, it’s not for the lack of trying, and it’s 100 percent deserving of being in there (how this hasn’t been reissued by a label like Relapse is beyond me). So, in absence of giving it that honor, let’s take a few minutes today to revisit what exactly makes this album so great.

I’ve found over the years that most people lean towards the band’s second and final album, Misery Index. While that album is also incredible, the band put their heads down and plowed through it a bit more single-mindedly; it more or less has one speed and one emotion to it. I love it, but I love Anticapital more: Anticapital has ebbs and flows, shades and hues. Anticapital takes you places in its very short runtime. Anticapital is everything that is great about grindcore.

There’s a feeling permeating Anticapital, and it’s part of what makes the album so great. It’s a punk despondency and there’s just no hope in sight; it’s like the most dismal aspects of the Pessimiser/Theologian catalogue played by the most proficient grind musicians of all time, but it’s being played at a basement punk show. And there’s no party after, because, well, have you read the lyrics?

The feeling of Anticapital, however, doesn’t leave the listener upset or feeling hopeless at the end of it. Rather, it shows society’s failings but inspires change. And the music echoes that feeling: it’s the good parts of anarcho-crust played by guys who had the skills to play the most technical death metal imaginable, so it just sort of sits in between the two, completely comfortably.

Ah, yes, good: now I get to talk about Rob Proctor. I’ve been involved in extreme metal most of my life and I can count the amount of times on one hand people have brought up Proctor’s drumming to me, which completely perplexes me. His drumming on this album is some of the best grindcore drumming ever, full stop. His style and flow was untouched (to see him play these songs live was art, pure and simple), his fills way more graceful than fills played at this speed during 45-second songs have any right to be.

Proctor’s drumming on this album deserves to be spoken of in the most hushed and revered of tones, as it’s some of the most stylistic and exciting grindcore drumming ever. Turn it up loud and tune into what he’s doing back there; it’s an amazing experience.

Now, how about those lyrics? Listen, I love heavy metal more than I love most things on this planet, but there is only one record that I have ever taken the lyric sheet for and given to non-metal friends and said “read this” (yeah, I’m super annoying). That record is Anticapital.

No band that I’ve come across has managed to encapsulate such despair so poetically, and has managed to write about politics in a personal manner without sounding, well, totally ridiculous like bands usually do when they go near “politics in a personal manner.” These lyrics are moving, touching, inspiring. Like I say, these are not hopeful lyrics, but they are incredibly written pieces; justice would not be done by simply reprinting parts of the lyrics here. To get as much out of Anticapital as possible, sit down with the lyric sheet and read along with the lyrics while the album is playing; this is an experience unparalleled in extreme metal.

This album may sound like bodies being ground through the machine, but it’s got heart and soul. The bass drum leads the charge through the alienation and the isolation that the lyrics speak so eloquently of. The guitars crunch through the brain and into the gut of your stomach. Through the unlikely medium of extreme grindcore, the band manages to convey a feeling of complete hopelessness and despair, vocalist Paul Pavlovich bringing those feelings home with a spectacular (and quite enunciated) vocal performance, one that shows more feeling than grindcore vocals usually do.

17 years later, the machine grinds on, and Anticapital grinds on, these 15 minutes never forgotten among those lucky enough to have heard this music in their travels through the underground and beyond. Anticapital has given us a lot over the years; all I can offer is a fist raised in salute while the other plays air drums like crazy as I take a break from reciting the lyrics to these songs to myself for the thousandth time in my life to give a humble “thank you” to the band for creating music of this magnitude. 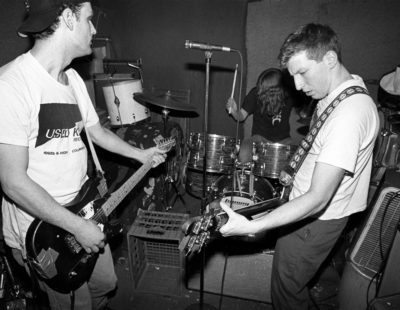