Somatic Decay, that abominably heavy death metal band comprising two former members of the late Ossuarium that debuted last week, are back with an exclusive full premiere of their three-song demo, Existential Decadence. All the way back in 2017, we featured Ossuarium, here on the D:L. Incidentally, they went on to release a crucial split with fellow Demo:listen darlings, Draghkar, and if you don’t know the Ossuarium full-length that came out in 2019, see about fixing that. But now Ossuarium are finished; long live Somatic Decay!

“Nate and I simply weren’t done making death metal,” Somatic Decay’s drummer/vocalist Ryan says, referring to how he and guitarist/bassist Nate continued on after Ossuarium sundered. “Once we got together we honed in on a more straightforward, headbanging sound [on] this go-round. A nod to our Finnish and Danish contemporaries along with, of course, some American death metal flavor.”

As for their name, that is the standard beneath which they will wage their skull-crushing campaign, Nate says: “We wanted something body horror related that conveyed a feeling of helplessness. Like your mind is intact while your form rots around you.” And we point out that it slant-rhymes with Seraphic Decay, he adds: “It was also a sick, albeit unintentional nod to the legendary label.”

When it came to writing material for Somatic Decay, Nate tells us he and Ryan started completely from scratch. “These tunes are original to this project,” Nate says. “Ryan and I are good friends so it was pretty natural to meet up and write riffs. After we finished ‘Surrender the Flesh,’ we got pretty hyped to try and sleaze out a demo.”

If you caught their quote from last week’s track premiere, you may have noticed that Somatic Decay’s demo songs seem to encompass a greater emotional range than simply growling about gore.

“That’s a solid read,” Ryan confirms. “Lyrically I try to keep things horrifying for sure, but using it as a metaphor for more human struggles. I love reading old Mortician and Corpsegrinder lyrics where it’s like ‘stab stab murder kill now you’re dead,’ but also the poetry of Daniel Butler of Vastum/Acephalix or the angst of Edgy 59 of Burning Witch.”

Somatic Decay went to Sentinel Studio in Seattle, Washington to record Existential Decadence with soundboard slayer Detto. Nate tells us there were pandemic-related challenges along the way, but overall, he says, “Working with Detto was sick.” He tells us, “[Detto’s] super good at what he does, and made the recording process feel effortless. Fully plan to hit up Sentinel again for future recording.”

Last week Sean Frasier took us for a deep dive into the depths of “Mutilated Facades,” the opener from Somatic Decay’s demo. Here’s what Somatic Decay have to say about the other two bangers that compose Existenstial Decadence.

Ryan reiterates how “Surrender the Flesh” was the first song Somatic Decay wrote together. “It’s all about that hook going into the ‘doopa’ part at the end for me,” Ryan says. “The theme is L’appel Du Vide or the call of the void. Here the ‘void’ is a giant, boiling stew of flesh and sinew calling you jump on in.”

As for the demo closer, the subtly-titled “Total Human Obsolescence,” Ryan says: “This song is definitely heavy, no frills. Wrote it about humans devaluing their own humanity in favor of wealth, power and individualism and how it will cause our inevitable demise.”

To properly contain this beast, Somatic Decay knew they needed artwork that could match its gnarliness. First for their logo, they went to Undergang’s David Mikkelsen who splatters out graphic logos under the name, Ink Lesions. For their demo artwork, they went to Form Terror Growth, AKA Bloodspore drummer Fred Mycelium, who conjures dimensional monstrosities from his inkwell for death metal bands around the world. 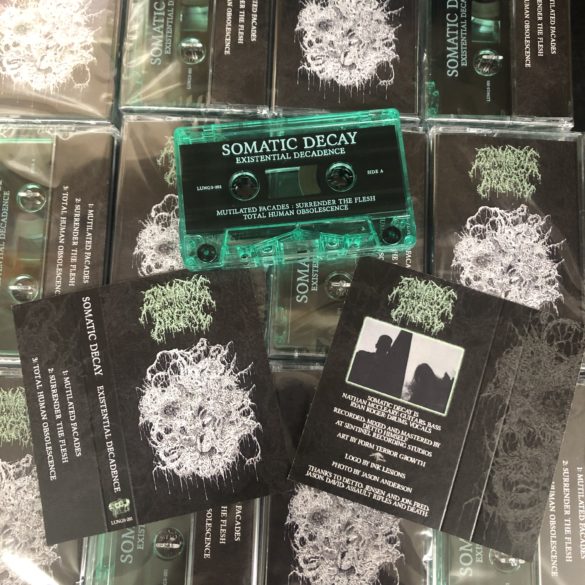 “Nate found Form Terror Growth through the art Fred’s done for his own band Bloodspore, who I saw a couple months back here in Portland and damn they rip!” Ryan tells us. “We both knew his stuff was perfect for us, and it looks great alongside David Mikkelsen’s logo. Fred is not only super talented at making nasty art, but has also helped a ton with design work for us. Thanks Fred!”

Iron Lung Records will be putting out Existential Decadence on pro-tape. Ryan inform us, “Iron Lung releases for the hardcore band I play drums in, Retirement.” He continues: “Jensen and I met at a show we played with other choice ILR bands Nasti, Convenience and Electric Chair. We hit it off and bonded over death metal instantly. Jensen plays guitar in Innumerable Forms who are my favorite goddamn death metal band doing the thing right now. When I let him know about this project he told me to keep him posted and here we are! Shouts to Jensen and Jon for running the best label on Earth!”

Ryan adds: “Tape comes out May 6 and is up for preorder now via Iron Lung!”

Meanwhile, Nate lets on that “since recording” Somatic Decay have “gone straight into working on new material and expanding on [their] sound.” Nate says: “We plan on playing live soon (not as a two piece), but the focus at the moment is hashing out these new songs.”

Ryan graciously concludes with a personal thank you to Demo:listen “for keeping people informed on what’s happening in death metal!

Go get that Existential Decadence pro-tape right now while you still can.