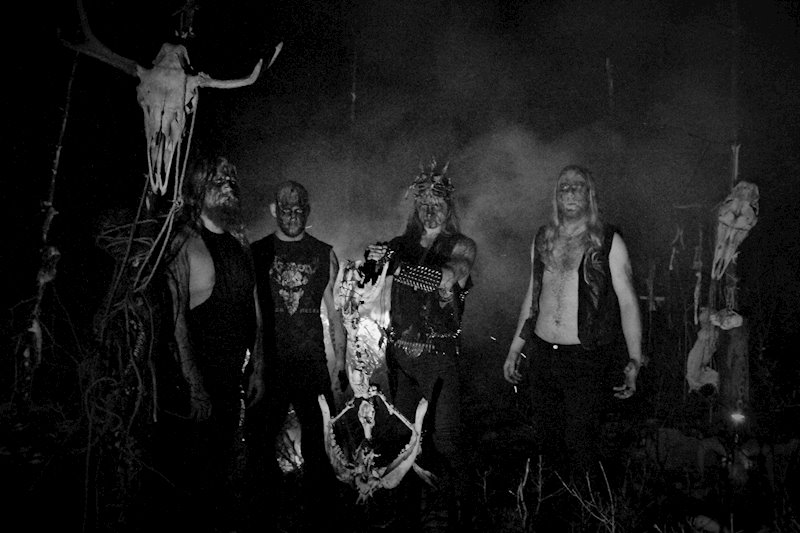 “Open your mind and let yourself go into a world without any limitations or boundaries,” say Voodus in unison. “Throw yourself into the untouched wilderness with us, and let us hunt like wolves, dance with the Darkness and make love with Death! Let us kiss the blood-dripping lips of Lilith and drink the power of Her dripping, divine womb! Let us treat the everlasting hills of Her destructive maze! Let us be one with the Darkness! Let us be one with the Wild! Into the Wild is Voodus tribute to the unknown and to all that dwells in the darkness beyond, the Black Flame that burns in our hearts and to the music that makes our minds open and widen their views! To the Devil, who gave us wings.”

Wings, indeed! Voodus, formerly Jormundgang, formed in 2014 out of the desire to reap the metal of death and sow the seeds of evil via riffs, screams, and pounding drums. The group’s debut EP, NightQueen, saw light of day (day of darkness) via indie Jawbreaker Records. Now signed to Sweden’s Shadow Records (in cooperation with the recently resurrected Regain Records), Voodus aren’t staying in the shadows to promote their songs of sin, their tunes of twilight on new album, Into the Wild. They’re teaming up with the right set of heathens (that’d be us), pagans, and occultists ’round the globe to spread mid-’90s Swedish death-black fire when bands like Mörk Gryning, Dawn, Abyssos, and Sacramentum hide under the guise of death or appear catatonic. Voodus is the embrocation for wounds long hurting for a time forgotten, buried under the pages of dead ‘zines, magazines, and Angelfire webrings.

Bring on the ’90s! And join us in our pursuit of the lost art of individually framed band member photos! Here’s Voodus…

NOTE: Hit the forward/backward buttons on the player to advance tracks.

** Voodus’ new album, In the Wild, is out now on Shadow Records/Regain Records. Order the CD, 2XLP, or digital HERE. Do it now before the dark dawn takes your very life!