Love ’em or love ’em, except for that one album, there’s no denying Cryptopsy have a place in extreme metal. And we’re not just talking extreme metal history, as the band has proved with new EP The Book of Suffering – Tome II that they’ve still got technical death chops to compete with the masters. The EP’s four songs an excellent summation of all that is great about this Canadian DM institution.

To celebrate tomorrow’s release of Tome II, we rounded up Cryptopsy drummer Flo Mounier and found out what five heavy albums changed his life. Slayer – South of Heaven (1988)
Well, to start, let’s make this pretty simple. I started playing drums in my early teens and most everything I listened to from that point on had to have interesting drumming. My knowledge of metal was not very extensive in the late ’80s. I would pick up cassettes randomly and try various things out. My introduction to Slayer started with South of Heaven. I wore this cassette out! I mean, the title track alone hit an instant chord with me. It was catchy yet dirty and dark. Dave Lombardo’s fast double bass drum work became an immediate inspiration. There was a challenge to Dave’s playing that made me want to push harder. I wanted to play like this. I needed to play faster, but without losing focus on groove. My teen years weren’t necessarily my most influential ones but they definitely were my most formative. This album was one of the first to drive me down this road called “metal.” King Diamond – Conspiracy (1989)
In the late ’80s, videos were a big thing, and we were fortunate enough to have a few really cool TV channels that played great metal. I would try my best to watch these programs when they aired, oftentimes recording them to watch over and over again. I discovered so many awesome bands this way. One of these videos was for the song “Sleepless Nights” on King Diamond’s Conspiracy. Wow! What just happened? Not only are King’s vocals demonic, but the drumbeat and fills were executed to perfection. And then there was the riffing and the solos! Andy! Yeah, this was totally one of my fave bands at the time. The video made me go out and buy a few of the King Diamond albums and it seemed like I couldn’t be disappointed. This was my first real introduction to tight musicianship and atmosphere. I’ve always had a soft spot in my musical heart for the King. Keep on rocking! Pestilence – Testimony Of The Ancients (1991)
As the early ’90s started, it was clear that my listening preferences were starting to become heavier and heavier. It was around this time that I became the newest member in a band called Necrosis (early Cryptopsy). It was through Necrosis that I was being shown the ropes of this relatively new genre called death metal. A lot of what I was being introduced to was quite a departure from the metal I was listening to at the time. I soon found the balance that I needed to move forward into death metal with the mighty Pestilence. These guys had intensity that I dug as well as the catchiness of the things I appreciated. I lost my shit when hearing 3:25 of the song “Presence of the Dead.” Being a fan of classic rock—Led Zeppelin, Pink Floyd, etc.—this was it! Brutal, catchy, and with roots. I was now connected in many ways to this new genre and wanted to hear more. Edge of Sanity followed soon after. From here things just naturally became faster… brutal… extreme! My death metal collection was now growing and the anticipation of new releases, shows, and new discoveries ruled my life. I took the best parts of my favourite bands and threw them all into my melting pot of influences. I believe this was really the beginning of what shaped my true DM drumming and composing. Brutal Truth – Extreme Conditions Demand Extreme Responses (1992)
My first band, Necrosis, was brutal—it was fast and it was what was to become Cryptopsy. We had the catchiness, we had the brutality, we had the speed, but the extreme element wasn’t fully polished. This changed soon after seeing Brutal Truth live. The very next day I rushed to the record store and bought their album Extreme Conditions Demand Extreme Responses. I absolutely loved how they pushed the BPMs and still maintained clarity and groove. In fact, the china blast beat that I would later adopt was greatly influenced by Brutal Truth. This was raw and uncensored hardcore brutality. It’s tough to put into words how I felt that evening at the Foufounes Électrique. It is easy to say that this classic helped to shape a key element of my playing. Thanks, gents! 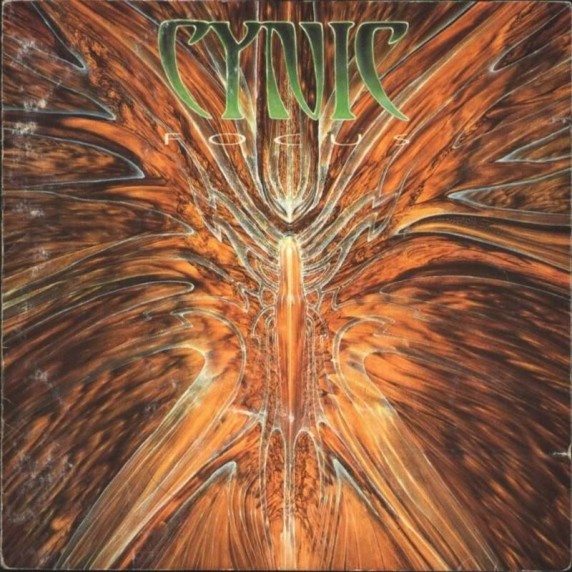 Cynic – Focus (1993)
… and then there was Sean Reinert! I finish with this because you’ve asked for five. I want to be very clear that I have been influenced by thousands of other bands and thousands of other musicians (I’m apologizing right now to all these amazing people). I’ve always been a big fan of the band Death. Such great drummers played with Chuck—Sean, Gene, Richard, etc. When Death’s Human came out, my ears were immediately intrigued. There was just something different about those specific beats and fills. I mean, splash cymbals, triplet feel, ghost notes? What’s going on here?! That was it. I was hooked! It was shortly after this that I heard Cynic’s Focus. I gotta be very honest here—the album was too much for me. I put this album away and only started getting into it a couple years later. The reason for this was that during this period my influence from other styles of music started emerging. This included things such as jazz, Latin, progressive rock, and metal. It was at this point that Focus then started to make sense to me. Wow, you can mix jazz with death metal and still sound brutal! This is something that’s been in the back of my mind throughout the entirety of my career. My next set of challenges were laid out… This album is still one of my favourites.