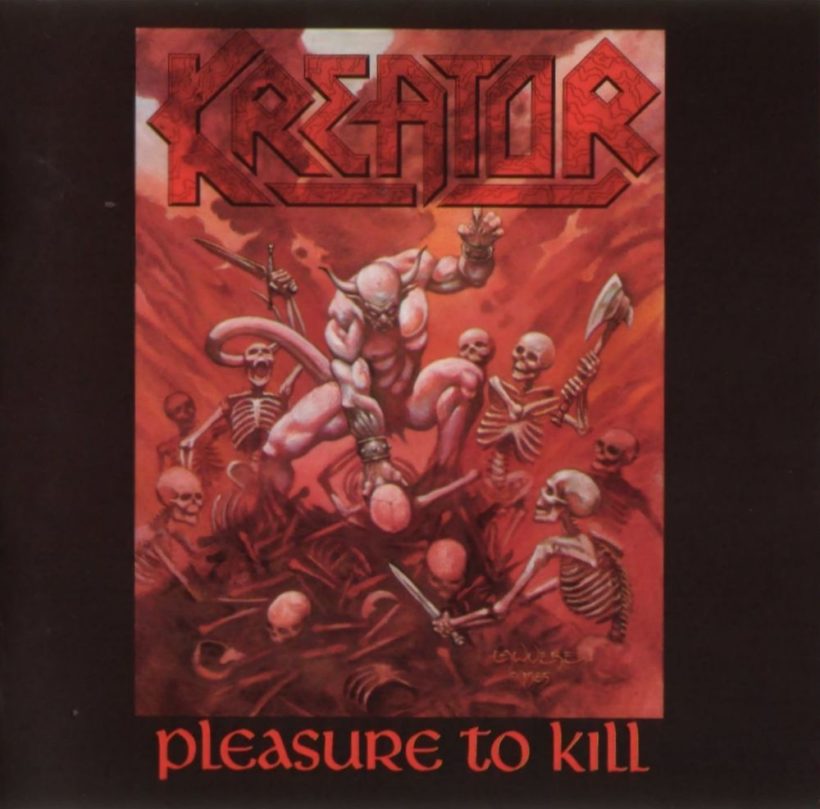 When one takes inventory of the successes Kreator have experienced over the course of the last calendar year—headlining the 2017 Decibel Magazine Tour, appearing on the cover of our majestic tome, the release of not only one of the best albums of their discography, but also of the year in Gods of Violence, and continued triumphs on the overseas touring and festival circuit—it’s hard to picture the band as inexperienced youths struggling to carve out a name and sound for themselves. But there was a time, and in addition to allowing fans to nerd out over the greatest albums of metal’s illustrious past, the Hall of Fame often and inadvertently shines a light on leaner, more difficult times for the scene, which is also part of the fun.

Coming off of the runaway success of their 1985 debut, Endless Pain, the stars in the eyes of the Essen, Germany, thrash brigade may have been shining brightly, but the band’s members—guitarist/vocalist, Miland “Mille” Petrozza, drummer/vocalist Jürgen “Ventor” Reil and bassist Roberto “Rob” Fioretti—found themselves confronted with reality’s hard slap. Despite the international acclaim generated by that record, they were still school-aged, spotty-faced teens unable to drive themselves to their own rehearsals and shows. Suddenly, however, they found themselves in the world’s eye, writing the follow-up with a deadline imposed by Noise Records boss Karl-Ulrich Walterbach, traveling to the then-divided city of Berlin to record with up-and-coming hotshot producer Harris Johns. At the same time, the band members had nearly no live experience under their belts and their second guitar spot was in a state of limbo.

Regardless, the trio had agreed upon a goal with Pleasure to Kill: to push personal limits, improve their collective musical skill and write the best thrash metal they could. Few would argue that their second album didn’t fulfill that goal. From the infectious rage of the title track and the epic moodiness of “Riot of Violence” to the blackened tones seasoning “Under the Guillotine” and the overall improvement in songwriting and musicianship (especially Petrozza’s soloing), Pleasure to Kill was and remains a high-water mark of not just Teutonic thrash, but the entire genre itself. Songs from the album are still part of the band’s set list, and if you haven’t been to a show and seen at least one back patch featuring the album’s cover art, it was probably a shitty show.

Note that the entry of Pleasure to Kill into our illustrious Hall is the culmination of nearly a decade of often frustrating gumshoe work, failed convincing, go-nowhere begging and pleading, full-stop dead ends, middleman stymieing, language barriers, lost interviews, and disappearing and reappearing ex-members. Some of the adventures in bringing the story of Kreator’s second album to you were previously documented in our “Almost Hall of Famous” feature [Issue #125, March 2015], but know that this only tells part of the story. Now that the tale is complete, we’d like to thank all who’ve helped over the course of that time in making this reality, especially Gunnar Sauermann, without whom this never would have seen the light of day.

Got to get more Dream Death? To read the entire seven-page story, featuring interviews with all members on Journey Into Mystery, purchase the print issue from our store, or digitally via our app for iPhone/iPad or Android.