There are recurring themes in metal lyrics — death, gore, Satan… and chains. Today, Decibel is celebrating this important topic by ranking the top 10 songs about chains, as decided by Season of Mist’s Radio Promotion/Sales Chief Greg Karlowitsch.

10. Cauldron – “Chained Up in Chains”
How could I NOT include this song? “Chained Up in Chains,” from the album “Chained to the Nite,” which says the word “chain” or some variation seven times within. Let that sink in for a second. Cauldron might have jumped the shark with this song, but it just shows how much of a hallmark that the ‘chain’ can be to the overall genre. “Roped Up in Ropes” just wouldn’t have the same effect.

9. Chastain – “Chains of Love”
There isn’t anything insanely special about this song that inspired me to put it on this list other than the fact it RULES. Leather Leone is a complete badass and criminally underrated. I dare you to not try and attempt your highest falsetto during a spin of this jam. It might be impossible.

8. Loudness – “Heavy Chains”
This is an interesting one. Loudness is using chains as a theme of relationship oppression but not in the first person. Minoru Niihara is singing about a woman who is dealing with being bound by the chains of romance. Is Niihara the one that inflicted this to her, or is he merely witnessing it? It isn’t quite certain, but it sets this song apart from many of the others on the list for this reason.

7. Trance – “Break the Chains”
Wow. Where do I start with Trance? This is a hard pill to swallow, admittedly, for some. I think for a lot of outsiders, Trance falls into a category much like Manowar where the listener thinks it’s a gimmick or a joke. Much like other early European metal acts, the penmanship of songwriting is very obviously ESL, which leads to simple rhyme schemes and surface level material. If the vocals don’t bother you, then turn it up. This is a meat and potatoes rocker which pleads to be blasted at high levels.

6. Raven – “Break the Chain”
This is one of the more derivative songs on the list, for sure, but I don’t mean that in a bad way. Raven uses the timeless tactic of breaking the chains of normalcy to rebel against whatever is oppressing you. It could be about a relationship, a dead-end job, or your parents screaming in your face about a Twisted Sister pin on your uniform. It is vague enough so any pimply-faced budding rocker can sympathize with it and think it was penned specifically for them.

5. Running Wild – “Chains and Leather”
While every other song uses the idea of chains as a metaphor for some type of relationship, Germany’s Running Wild really puts it all out there on the forefront. There’s no subtlety here: it’s a song about chains. Wearing chains. Chains are cool, right? Thanks to bands like Judas Priest, Saxon and, of course, Running Wild, you could just sing about your clothing and aesthetic and make a balls-to-the-wall anthem out of it.

4. Van Halen – “Unchained”
I’ve read the lyrics to this song about a half-dozen times, and I can’t really gather anything from it. I think Diamond Dave simply just thought the word “Unchained” sounded cool.

3. Dio – “Egypt (The Chains Are On)”
Ronnie James Dio’s offering on this list is one of those perfect examples of a song that a half-baked teenager could use in a high school history class to try and level with his teacher to get a passing grade. Ever so loosely based on biblical-era Egyptian history, Dio never even mentions an attempt to remove any constraints in this song, thus making it one of the bleakest tracks on this list. He reiterates over, and over again that “still the chains are on,” leaving you with no happy ending or sense of closure.

2. Judas Priest – “(Take These) Chains”
I’m starting to think that this list is also about how many songs we can discuss with parentheses in the title. Penned by outside songwriter Bob Halligan Jr, (who worked with other bands such as KISS, Blue Oyster Cult, KIX and Helix), this is the closest thing to a ballad that Screaming for Vengeance has to offer. The lyrics don’t necessarily talk about destroying or decimating any chains like many on this list. Rather, The Metal God himself pleads that they simply be removed from his heart. This is another prime example of chains being used as symbolism for the oppression felt by love and longing. We have all been there, Rob.

1. Dokken – “Breaking the Chains”
This is the Alpha and the Omega of chain-breaking. If you started reading this article and didn’t think this would be included in some way, you must not really have any primal desire to read a think piece on quintessential heavy metal jargon. This track, as well as the previously discussed Judas Priest song, were what spurred my desire to annoy/convince Editor-In-Chief Albert Mudrian to let me tackle this project. What Don Dokken and crew did with this track was bring chain-breaking to the heavy rock mainstream, using it to discuss the pains and trials of a failing relationship. Obviously, this would become a highly used tactic in the metal world for decades to follow. I think we all need to take a second and thank Dokken for their contributions. 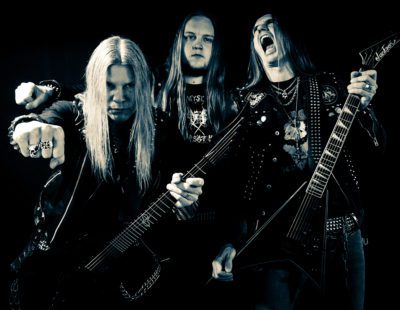