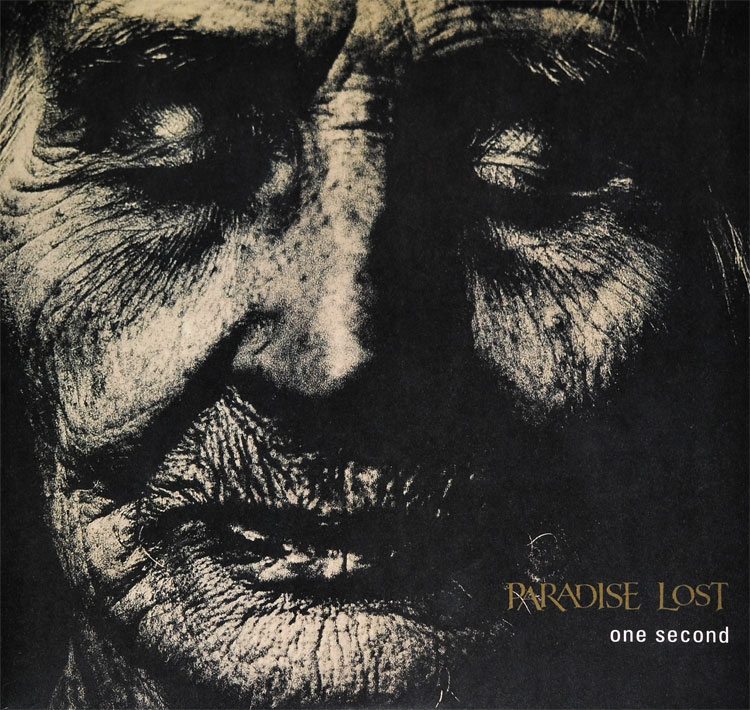 Almost every band has that album: You know, the critically and/or commercially reviled dud in an otherwise passable-to-radical back catalog. Occasionally, a Decibel staffer or special guest will take to the Decibel site to bitch and moan at length as to why everybody’s full of shit and said dud is, in fact, The Shit. This time around, Shawn Macomber defends Paradise Lost’s One Second.

Somewhere around here a male voice should come in and utter, “Thanks for listening to the good tracks on this album. If you are either a) masochist b) suffer from insomnia c) like emo…please continue listening” — One Second user review, Encyclopaedia Metallum

Paradise Lost has gotten softer and softer with every album and now they have fallen to the point of shaving cream. This is so soft that REM puts out heavier riffs. The drums are now fake, the lyrics are shallower than a puddle in Egypt, and the vocals are as clean as a frat boy. — “Someone Kidnapped the REAL Paradise Lost,” anonymous Amazon reviewer, 1999

“And for one second I lost my head…”

So croons Paradise Lost frontman Nick Holmes during the opening moments of One Second, but whatever veiled real or metaphorical freak out the modern day troubadour references here paled in comparison to the breakdown some fans had when the band’s sixth full-length dropped twenty years ago this very day.

Our love for the true heretic can be extremely fickle.

When a restless visionary is breaking down those particular walls we’d like to see fall—or, perhaps more accurately, find ourselves appreciating the way the rubble rests after the fall—we celebrate: Finally, someone is cutting the rot out! Progress! Revolution! We are no longer bound by the strictures and shibboleths of yesteryear!

If those same trailblazers keep that striving and evolving up, however, many of the former enthusiasts and admirers who once heralded the dawning of a new day transform into an army of Annie Wilkes,’ sledgehammers in hand.

You’ve been out of your room.

And, to be fair—as readers familiar with the sort of records that frequently end up earning the Justify treatment well know—forced evolution isn’t always positive, interesting, or gratifying. Indeed, many a band has abruptly veered out of its lanes and ended up in fiery, legacy-immolating crash.

But the shift on One Second—though real and substantial—was not abrupt. Metamorphosis has been the rule not the exception throughout the nearly thirty year history of Paradise Lost—and the care, craft, and integrity the band has consistently brought to that process should, in theory, have built up a sizable reservoir of goodwill and trust.

Judged solely by the furor the record instigated, however, one is forced to presume some fans were lulled into a deep, dark slumber by Gothic only to be shocked back into consciousness amidst a nightmarish soundscape of clean vocals and electronica-infused rock music six years later. (Pity those who did not wake up until 1999’s Host, ably defended here by my colleague Greg Moffitt.) For those who had taken the ride from the initial eruption through Shades of God (1992), Icon (1993), and Draconian Times (1995), the transition no doubt proved considerably smoother—essentially, One Second is the same congenital beams of the latter refracted through the same unique prism at a different angle.

“At the time there was also black metal, thrash metal, and everyone wanted to describe what type of something was so we went ‘Okay, we’ve got the Sisters of Mercy elements in our music, let’s call it goth metal,'” Holmes told Kerrang! during a discussion of the Icon mutation four years before One Second. “We were getting better as musicians as well and I was hopefully getting better as a vocalist. When that happens you want to fine-tune what you’re doing. It’s also about not wanting to get stuck or pigeonholed into one particular musical place.”

One Second draws this Sisters of Mercy element closer to the surface—the line about “corrosive instinct” could be seen as an answer to the “Hey now, hey now now, sing this corrosion to me” challenge—but it is not an injection of a foreign pathogen into the Paradise Lost bloodstream.

Also, let’s maintain at least a tiny bit of perspective here: Paradise Lost getting its Songs of Love and Devotion on to some degree is not nearly as weird as the thought of Depeche Mode going Gothic instead of blues on Delta Machine. Though the latter would have been preferable to your humble correspondent, alas, the two are hardly interchangeable.

If One Second were a lesser record, the most obvious approach to defending it would be simply to note that today Paradise Lost is today putting out some of the very best—as well as heaviest—albums of its career and, thus, whatever sonic cocooning kept the band engaged and together until Stella Got Her Growl Back is retroactively justified.

Happily, that’s not necessary—the aesthetic, riffs, lyrics, and compositions on One Second are all vintage Paradise Lost. Despite the cries of sell-out none of this sounds contrived or desperate or escapist. It is as affecting and soul-seizing as anything else in the band’s catalog. There is a natural flow on display throughout the twelve songs that is a bit akin to watching a favorite actor take on a somewhat different role than what he or she is known for—and killing the performance.

“After we recorded Draconian Times and toured it non-stop, we just felt like doing something else—something a bit less up-tempo and darker,” Holmes tells Decibel. “Also Greg bought a keyboard! The result was One Second. It was greeted on the whole very positively, but quite a departure from Draconian Times and pissed off a few people naturally. However, it’s very much a part of the band’s journey—like every album has been—and we enjoyed making it.”

Unless your the sort of Paradise Lost fan who sees the Punxsutawney of Groundhog Day as a utopia rather than existential hell, One Second should prove a delightful way station between death/doom and heavy metal transcendence for you as well.