Bone Eater’s two-song demo MMXXII came out back in mid-February lugging a sound so massive, so lumbering it was like a mountain stood up, shrugged off its ecosystem and carved a destructive path along the horizon. Hitting play on opener “Rot Into Filth” means entering a world where time moves differently, where gravity oppresses and megariffs yet reign over the land. “This Grave” is the Saturn-like planet then to “Rot Into Filth”’s Jupiter-like planet. Slightly less massive, but bearing a ring of debris, or, in this case, a fast(er) part, “This Grave” serves well as both the second and closing track. With just two songs, this New Brunswick band just caused a major extinction event over some would-be contenders.

When we reached out to Bone Eater for a potential interview, we were hoping to connect with someone in the band. We reached Scott Miller, and found out he is Bone Eater. 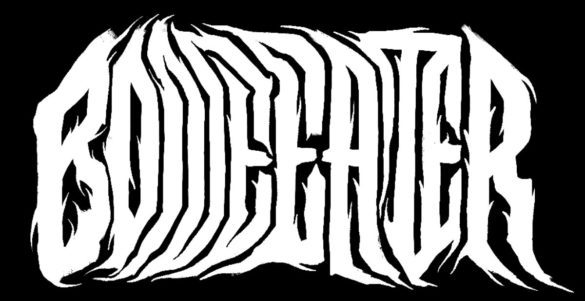 Scott says Bone Eater “started with the intention of being a ripping fast black metal project a few years ago.” He continues: “I started recording some demos and got busy with other things, so they were never completed.”

The name Bone Eater came about when Scott “came across the animal Osedax, which is a type of worm that bores into the bones of whale carcasses and feeds on them. Osedax is Latin for ‘bone-eater,’ which I thought sounded great and straight to the point. Like I said, it was originally a black metal project, but when I started these new songs, I thought the name suited the sound even more appropriately, so it got recycled. Simple name. Simple music.”

Scott says, “I just love huge riffs with huge tones. No band I’ve ever played in has been appropriate for songs of this style, since they’ve been mostly faster projects with a tighter sound. I figured it was time to get some fuzz pedals out and slow it down.”

As for the two songs that make up their demo, Scott tells us, “These songs were written a couple years ago. The writing actually started out as testing a couple fuzz pedals I had, to see how they sounded recorded. I got messing around with a few riffs and this is what it turned into. I had no intention of anyone else ever hearing it or it ever becoming a band, which is really freeing. No scratch tracks, no editing, the guitars on the recording are the original ideas as I wrote them. I have a tendency to jam tons of riffs into songs and for some reason writing in odd time signatures comes really naturally to me, so I was trying to avoid both of those things. The guitar tones really pushed the writing in the direction that it went, because they were very limiting. Anything fast was a mess and certain chords and phrases were just completely unintelligible. Those restrictions made the writing limiting, but fun. I really tried to use repetition without it getting boring, but giving the parts enough space to really sink in. The heaviness comes from amps on the verge of meltdown instead of ‘crazy’ riffs.”

Turning toward the lyrics and concepts explored on the demo’s two tracks, Scott says, “I gravitate towards writing pretty vague lyrics that can be interpreted in different ways. Where these songs and even the band name really embrace simplicity, I figured the lyrics should as well. They deal with death (oh, how original). ‘This Grave’ was influenced by my wife’s job, where she deals with death regularly. She was talking about how so many people will die with no friends or family around and how she’ll try to be with them so they’re not alone when they pass. That’s heavy.”

Continuing on to talk about the recording process, Scott recalls, “I played and recorded everything myself at Ancient Temple Recordings. Guitars were first, as I was writing the songs. My process for writing is to program drums while writing guitar riffs, so I can get the feeling right for when it’s time for actual drums. I’ve always done this for demos with my band Anthesis, which helps get the feel of the riffs across to the other guys instead of just a stagnant click track. So, just out of habit, that’s what I did for these songs as well. I recorded bass and real drums after guitars and then finished with the vocals. The biggest challenge was deciding how to tackle the vocals. There are a lot of vocal directions that could work for these tracks, so that was a battle. It was a toss up between a more drugged out Electric Wizard type stoner vocal style, or the way I decided to go, with the death metal guttural vocals. I’m glad I went with the style I did, because I think it makes the songs a lot heavier.” We ask about the artwork, which we find to be killer. Scott says, “I’m glad you brought up the artwork because I’m so happy with how it turned out. It suits the band and lyrics perfectly. It’s oil neo-pastel on paper, by Portuguese artist Nuno Zuki, known as Belial NecroArts. I love it so much that I just had shirts made of it as well. You’ll definitely see his art again with future releases.”

Considering how everything’s turned out so far, Scott reports, “I’ve been blown away by the positive response so far, especially considering I had no intention of putting it out at all. I’ve been shipping tapes all over North America and Europe, which is great. Plus I get to talk to people like you about it, which I love!” Thanks, man. We love it, too!

Good news! Bone Eater tells us, “I’ve got another release in the works right now. Another 2 tracks of heavy riffs clocking in around 18 minutes. Same vein but definitely different than these tracks. I should have that out by fall. The plan is a full-length after that. With live shows looking more promising lately, I guess I should get some friends together to play these songs live as well.”

That’s awesome! We’ll be there for more Bone Eater crushing death-doom and you better be, too. In the meantime, go pick up a tape and a shirt while supplies last!