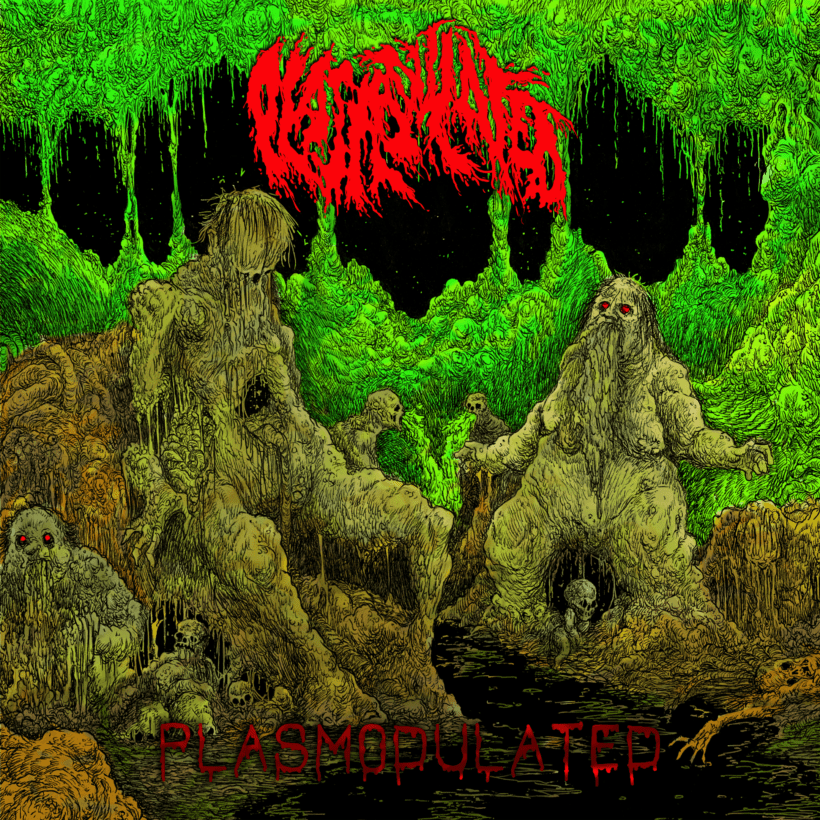 With his new solo endeavor Plasmodulated, Wharflurch’s guitarist Myk Colby pays homage to both the masters of death metal from his home state of Florida and to the freaks of death metal way out in Finland. In cross-breeding the Floridian and Finnish death metal styles, Myk uncovered one of the gnarliest formulae known to humanity. “Plasmodulated came from the FLURCH being all caught up on everything we needed to do, and I was goofing around with another idea for a band, and finally found some time to sit down to write and record it!” Myk exclaims, as if still reeling from his discovery. “I just can’t stop the riff fountain! Plus it seemed fun.”

If Plasmodulated doesn’t sound like the death metal you’re used to, at first, that’s not a side-effect from the demo’s potency. Your experience is accurate. The guitars on this demo, according to Myk, are tuned to “E-flat Standard!” Myk explains, “I had been listening to a lot of older death metal, via Ken’s Death Metal Crypt and listening to the era where thrash started morphing into death, and I wanted to take that sort of sound and play it more in a modern death metal style, like thrash riffs given the ultra business.”

Plasmodulated is what he calls it, and that’s a sick name indeed. Note to all the new bands out there, it was not his first choice. Says Myk, “The name came from my desire to have something that when you google it, nothing else comes up. I originally had a very stupid name for the project, which I won’t reveal here, but needless to say when I started playing the early demo stuff for people they were like ‘You absolutely CANNOT call it that!’ So I am always reading stuff about mycology and slime molds, and I decided to try to come up with a super yucky combo word, and when I googled ‘Plasmodulated’ I discovered it wasn’t a real word, therefore PERFECT!”

Myk goes on to explain how he brought about Plasmodulated. “Mostly, I would just sit down and try to come up with creative ways to make super heavy riffs interlock like a puzzle,” he says. “So usually I would start recording stuff and bang it into a decent song shape, then go thru and kinda record everything tight and proper.”

Next, it was on to the recording process, which Myk, diehard and dyed-in-the-wool kinda death metal dude that he is, handled all that himself. But you see, a demo like this, full of inspiration, like a cryptid sighting—you don’t just record it. You capture it.

“I recorded it all at home, which is great because … I am a madman and I must see the whole idea through to the end before I’ll be satisfied or able to even relent. Some songs would take me all day to write, then I would track it all that evening. Two songs on here were completely written and recorded the way you hear it on the demo in one day. Plus I had Cody Davidson (Fix My Face Records / Sanguisugabogg) and Pete Blanchet (Pale Gaze / Mutilation Barbecue) do a couple shredderiffic solos on the last two tracks, so that set it completely over the edge.” Myk says despite being a drummer himself, plenty capable of these songs, “it was simply more time-efficient to program it all out and have it sounding tight and right. I’ve done a lot ov drum programming, even on the older Wharflurch stuff, but now I have a better drum sample collection/player, so that helps keep it organic and alive sounding.”

Our sources told us that Myk had eschew his ‘psychedelic tendencies’ for this ‘side-project,’ a statement we watched fall apart the deHahaha, well I tried! You’re right though, there is a bit of that leaking in there occasionally. I suppose it’s just part of my being at this point. I did want it to not reflect the Wharflurch aura / atmosphere, but since it is me, that is hard to avoid. I definitely intentionally tried to write a very different sort of riff and song structure though.

Myk hired Gruesomegraphx to exepuke Plasmodulated’s logo and the demo artwork. He went to Gurgling Gore to handle this material with the care and responsibility it required. Myk tells us he “had been listening to the different songs [he] had, and kinda decided that they were good enough to stick together somewhere.” He goes on: “I sent it to a couple people to see what was up, but really I knew deep in my heart I would have to do it with Gurgling Gore Records! I sent it to Daddy Gore and he immediately got busy making it a reality!” Myk adds: “There will be two cassette variants, one red shell with black pad print, the other slime green shell with red print, and potentially a CD version sometime soon!” Looking ahead, Myk says, “Next up is writing more riffs, making it even more weird and gross, and potentially putting together a lineup to do some shows.  I have a couple people in mind that could take this project to the next level, it’s just a matter of organization at this point!” This Friday get Plasmodulated from Gurgling Gore!