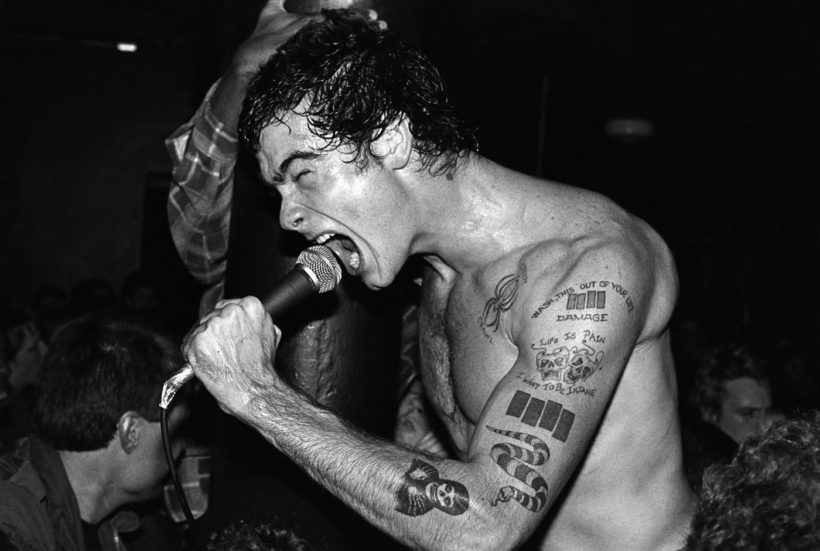 Decades ago, a long-haired kid with glasses decided to marry his love for photography with his love for local punk rock, bringing his camera to a show with Discharge, Government Issue and Scream. From then on, the young Jim Saah would document dozens of shows– chronicling the early DC Hardcore scene as well as other crucial punk in the ’80s. In the years that followed, Saah would become responsible for capturing some of the most iconic images of the era.

Saah has compiled some of his images to create In My Eyes: Photographs 1982-1997, a photography art book that documents his time in the scene, including an array of key bands from the hardcore and indie scenes. Available for preorder now, the book is filled with instantly recognizable images from the era including the images below, which Saah took the time out to discuss.

One of the cool things about the book is not only the diversity of bands but also how it’s organized– by band as opposed to by show and/or chronologically. If you had to name some of your favorite sets in this book, what do you think that would be?
Yeah, I did that on purpose because I wanted it to evenly show all the bands that influenced me. Punk rock turned me on to so much stuff– not just more music, but movies and books. That’s what I wanted the book to represent because I wanted the book to kind of represent my trajectory. So in addition to being blown away by Minor Threat, Scream and Void, I would say Talking Heads Stop Making Sense tour was pretty important, the Minutemen, and Iggy on the Blah Blah Blah tour were all pretty important. Also Pavement created a vibe that I really loved.

If I’m pinning you down and you can only pick one iconic photo, which one is it going to be?
Interesting question. It would probably be a picture of Minor Threat of Ian MacKaye, I think it’s the picture that opens up the Minor Threat section. Its Ian laying on a bed of people– he’s singing and you see the mic cord but the mic is gone and people are going nuts. That exemplifies to me what punk rock was about.

The shows I went to before going to see punk rock were all in an arena. If you grew up here, then you’d go to shows at big places where everyone’s sitting in their seats and they’re watching the show. But when I went to those shows, I almost felt like I wasn’t a show, it was almost more of a movie to me. Anyway, I liked Springsteen as a young person because my siblings got me into him and stuff, and seeing him on The River tour was one of the first shows I ever saw. But then I discovered punk rock. It wasn’t like being at a show. And the fact that you could participate and be part of it and jump on the stage and sing along with the singer, that just made it a completely different experience. Anyway, that Minor Threat shot exemplifies that because everyone is just enjoying themselves and they’re all just the mass pile of humanity, celebrating a community.

How many times did you get a chance to see Minor Threat? I’d imagine that it probably wasn’t that many times.
Yeah. They didn’t play all that much but we saw them every time that we could. I even went to see them at University of Maryland when they opened for Public Image Limited. We were appalled to be paying $12 to go see Minor Threat– we were snotty hardcore punks and probably thought Johnny Lydon was an old fart by then. I would say I saw them six times or so?

The Black Flag set starts off with a pretty iconic photo of Rollins that I’ve seen a bunch of places.
Yeah. if anyone has seen my work, that’s the picture that most people have seen first. That was at the 9:30 Club in early 1983. It was the first time I saw them. Henry left in ’80 or ’81 or something to join them and move to LA. I interviewed Henry that night– he grew up here and knew a lot of people but left by the time I started going to punk rock gigs. That show was really intense– I guess all their shows were intense but this one was most of the really angsty songs off Damaged. And it kicked my ass. It was just really intense.

There’s another Black Flag shot a couple pages in that I had never really noticed before that is one of my favorites. When you shoot a few rolls of film and develop them, you make a contact sheet and circle a couple of the images that pop out to you, then you print them and then you sort of put them away. But when I scanned everything and got to see it big on the computer, I discovered a lot of pictures that were really great that I didn’t know I had, which is why there’s a lot of unpublished pictures in this book.

Anyway the Black Flag shot has never been published. It’s a shot where there is sort of a triangle. There’s like these two guys on stage, just deciding which way to go. Henry’s in there with his head back and Ginn is in there. Chuck’s bass is in it too. There’s just so much going on in that shot.

Looks like there’s a set list in it, too.
And there’s another one with Henry with the mic in his mouth, from the same show where I really debated whether to crop the setlist out. It’s pretty intense, but I always love seeing set lists in the frame, so I ended up going for it that way. Something that I’ve noticed as a photographer is when I go through my older shots I always feel like I’m finding something new. For instance, and I would imagine this probably has happened to you a bunch, if you have crowd shots you may suddenly realize that you now know more people in the crowd as opposed to when you looked at the photos last time. Has that happened to you with any of your shots?

Yeah. Well, there’s a shot– it’s the last shot in the book. It’s a hardcore matinee and it’s basically a bunch of people dancing. That might’ve been the first show where I took pictures. It was GI, Discharge and Scream. I didn’t know any of those people yet, but if you look in the audience, you’ve got Brendan Canty, Alec MacKaye, Ian MacKaye, John Stabb who was obviously playing that night. I discussed it in the intro, but that’s the show where I kind of felt uncomfortable because I had long hair and no one else did… until I saw one guy with long hair, who got on stage to sing– John Stabb. it’s all about non-conforming.