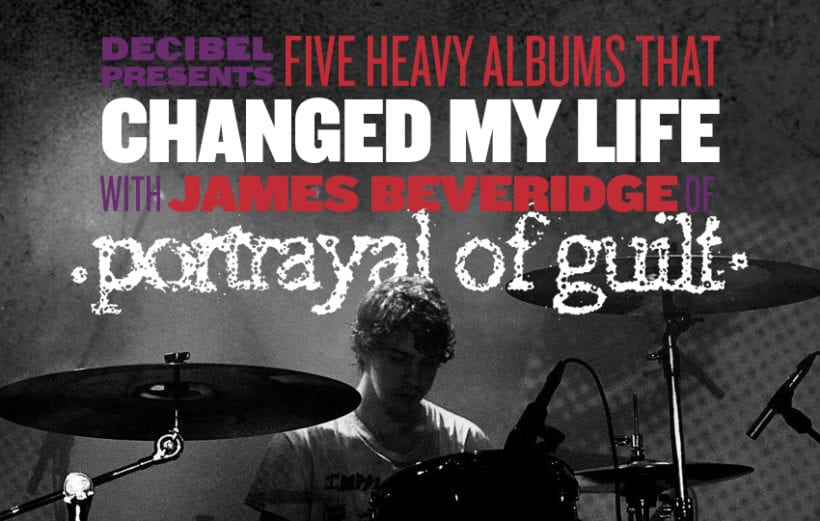 What does Daughters’ Hell Songs and System of a Down’s self-titled record have in common? More than you might think: they’re just two of the five albums that changed Portrayal of Guilt drummer James Beveridge’s life.

Read on to find out what sounds influenced the man behind the kit on Portrayal of Guilt’s new album, We Are Always Alone, which drops tomorrow on Closed Casket Activities. Slipknot – Iowa (2001)
Not much I can say about this album that hasn’t been said already, but this was probably the number-one game-changer for me. Heavy, dark, tortured music that appealed to the mainstream somehow and got countless people like myself into metal. Joey Jordison’s drumming on this record was the singular reason I begged my dad to buy me a double kick pedal and start pursuing “extreme” drumming in the first year or two of playing. Even though I ultimately ended up switching back to a single kick years later, the ideas/concepts have stuck with me. I literally had to unlearn the fills from this record because I couldn’t stop playing them in all the bands I was in. Anyway… amazing record. Daughters – Hell Songs (2006)
Swarm of insect-like guitar riffs, dizzying drum patterns, seemingly random song structures with Elvis Presley-style vocals to top it off. This record is perfect to me. There’s still nothing like it, in my opinion. I have vivid memories of listening to the first track over and over again at full volume on the bus ride to school, secretly hoping that other kids would hear it and think, “Damn, this guy is into crazy shit.” This is a record that I still listen to all the time and it never gets old. System of a Down – System of a Down (1998)
System of a Down is another one of those bands that got a ton of kids into metal just because of how popular Toxicity was, and although I like that record a lot, this is the one that really got me hooked on them as a child. I took two guitar lessons when I was maybe 9 or 10 and the first day I learned the “Enter Sandman” riff. That same day he tried to teach me a riff from “Black Dog” by Led Zeppelin and I was not having it. The poor guy told me to just print out a guitar tab from something I wanted to play so I chose “Sugar,” the big single from this album (also incredibly easy to play for a beginner, as it turns out). That was my introduction to the world of guitar tabs, and, because it was so easy, I decided I didn’t need lessons anymore and I never went back. Turns out not every band can make a sick song out of simple riffs like that. Big mistake on my end, I guess. The Sawtooth Grin – CuddleMonster (2004)
To me, this album is the epitome of “dangerous music.” Total MySpace-era scene grind but it for sure was on another level compared to similar bands at the time. The first song I heard was the last track on this record, called “Good Touch Bad Touch 123,” a more or less mellow, vibey track with a pseudo-dissonant but mostly pretty-sounding guitar riff played over a standard kick, snare, hi-hat beat that just repeats for a while and then fades out. Not at all a representation of the band/this record’s sound. Upon discovering what they actually sounded like, I was shocked. The music made absolutely no sense to me at the time, but I knew that I loved it just because of how abrasive it was. I got back into this record later on down the line after developing a better understanding of music and I love it now more than I did then, for sure. 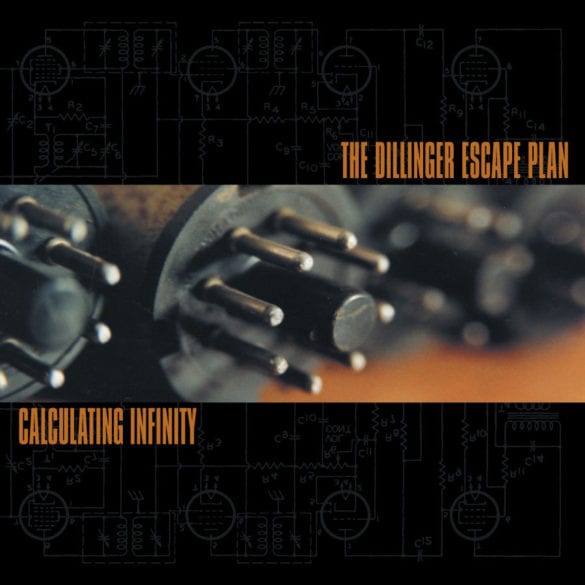 The Dillinger Escape Plan – Calculating Infinity (1999)
Obviously the godfathers of “mathcore” or whatever you’d like to call it. This one set the still-unachievable standard for drummers like me who want to push heavy music to the next level. Chris Pennie is a one of a kind player who essentially invented a new kind of bomb blast on this record. You know the one… Alternating singles between the kick and snare while accenting the china to align with or just complement sporadic guitar riffs/patterns. Haven’t found the right moment to throw it into a Portrayal of Guilt track, but one of these days I’m gonna bust it out. “Sugar Coated Sour” is my favorite track off this release, but nothing beats hearing those first hits on “43% Burnt” and feeling like someone’s about to come around the corner and beat your ass.