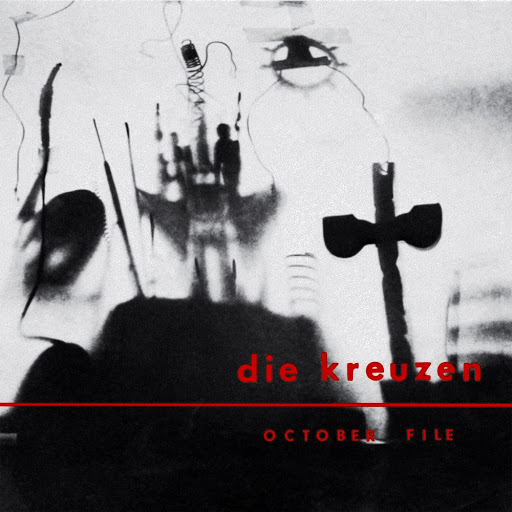 Die Kreuzen’s self-titled 1984 debut was a touchstone of mid-’80s Midwest hardcore, and helped to coalesce a scene with regional outposts in Chicago, Minneapolis, Detroit and the band’s own hometown of Milwaukee. With 21 songs splayed out in under 30 minutes, Die Kreuzen delivered short, sharp shocks, punctuated by Dan Kubinski’s lacerating vocals and frantic timekeeping from the rhythm section of bassist Keith Brammer and drummer Erik Tunison. It was a powerful opening salvo, but perhaps its greatest significance was that it influenced the shape of everything else to come from Die Kreuzen, including the quartet’s kaleidoscopic follow-up October File.

By 1984, the members of Die Kreuzen were already bored with rote geometry of hardcore. October File was the sound of a band working out a more complex musical equation designed to leave you equally ill at ease. The quartet’s second album includes a few concentrated nuggets from their salad days (“Uncontrolled Passion,” “Hear and Feel,” and “Conditioned”) that are very much in the vein of the debut, but the rest of October File allows for a lot more space, at times filled with oddball time signatures and creepy effects. It was also a coming-out party of sorts for guitarist Brian Egeness, who finally got a chance to let his freak flag fly with his vertiginous guitar leads.

October File demonstrates that Die Kreuzen’s only true peers at the time were SST bands like Hüsker Dü, the Minutemen and the Meat Puppets. Well, not when it came to overall prolific-ness, but definitely in terms of musical restlessness and a desire to subvert norms. To the uninitiated listener, the sonic difference between Die Kreuzen and October File is likely as shocking as the sea change between the first two Meat Puppets albums. It didn’t sit well with fans at the time; Tunison recalls that the band returned to their van after one gig to find “You suck now” scrawled on the side, and Kubinski claims that he still gets letters from fans, decades later, who felt betrayed by October File.

But isn’t agitation the essence of punk rock? Die Kreuzen moved things forward in a big way on October File. Putting aside their hardcore roots, it’s unbelievable that the same band responsible for the downbeat gloom and doom of “Hide and Seek” is also the same band that wrote “Cool Breeze,” which kind of has a R.E.M. jangle to it. With October File, we welcome an album that influenced the likes of Soundgarden, Napalm Death and Voivod, all of whom took the spirit of Die Kreuzen and piloted unforeseen dimensions. Hats off to a magical album that sounds like nothing else. October File sounds only like Die Kreuzen.

Need more Die Kreuzen? To read the entire six-page story, featuring interviews with all members on October File, purchase the print issue from our store, or digitally via our app for iPhone/iPad or Android.