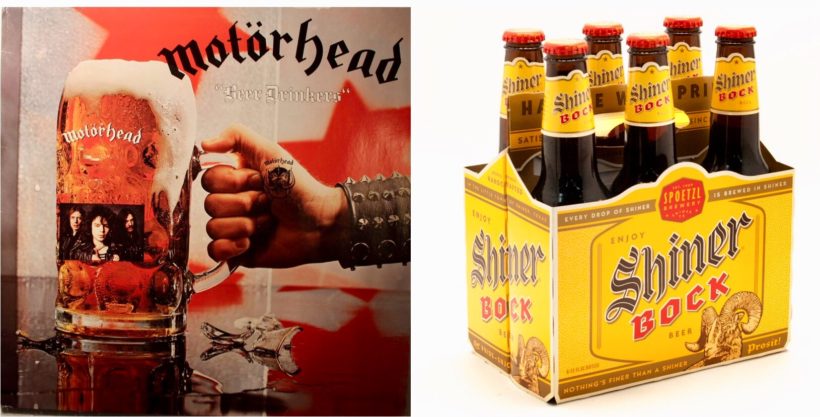 Back in June, a post I wrote for this very site, about a Motörhead-inspired IPA by Amplified Ale Works called Born to Lose, drew a lot of social media criticism for sort of an odd reason. I had everyone from old friends to the former lead singer of Portland’s seminal metal madmen, Wild Dogs, assuring me that Lemmy would not have liked/drunk/approved a Motörhead IPA. Apparently IPAs are not what Motörhead was about. With the recent passing of the final member of the “classic” iteration of the band, “Fast” Eddie Clarke, it got me thinking what beer would pair with a Motörhead album.

Near as I can tell, Lemmy wasn’t a big beer drinker, at least not later in life, when he seemed to favor bourbon and Coke. I can recall seeing various old pictures of he and his bandmates holding what looked to be Euro lagers back in the day, but, let’s just say, these guys probably weren’t craft beer connoisseurs. So, yeah, quite likely they weren’t IPA drinkers. But they did cover the ZZ Top classic, “Beer Drinkers & Hellraisers” (from ZZ Top’s 1973 classic Tres Hombres) on an EP that was released in 1980.

Two years later, in 1982, a French label took that “Beer Drinkers” EP, added four more songs from the band’s self-titled debut, as well as a B-side from the “Motörhead” single, and called the compilation Beer Drinkers. That was actually my introduction to Motörhead, and I probably bought it because I knew the ZZ Top song and was curious about the three outlaws pictured on the poorly assembled cover.

I was a bit underwhelmed by the compilation at the time, but then this wasn’t the band’s finest material. What did impress me, though, was that ZZ Top cover—Clarke even does a rare lead vocal, splitting the lines with Lemmy, just as Billy Gibbons and Dusty Hill do on the original. Motörhead did an impressive and fairly authentic version of ZZ Top.

It was later brought to my attention by a Hendrix-worshipping guitarist that there was a strong connection between Hendrix, ZZ Top and Motörhead. Seems weird, but it’s legit. Gibbons is a diehard Hendrix fan and Hendrix’s style and riffs were given a Southern rock treatment in many of his songs. Along those same lines, there’s a very bluesy and “American” swagger to early Motörhead that’s easy to miss due to the speed at which the riffs are played. Slow ’em down, add a bit more swing and there ain’t a whole lot of difference between old ZZ Top and old Motörhead. Seriously.

Hence, my beer pairing of this weird Motörhead album with Texas’ most iconic beer, Shiner Bock. This tasty amber (or Vienna-style) lager has a goat (bock in German) on the label, isn’t too alcoholic and has just enough flavor to keep you coming back for another. It’s not too hoppy, not too dark, not too weird. It’s brewed by the oldest independent brewery in Texas, Spoetzl Brewing, with just four ingredients: water, hops, yeast and malt. This is not a beer that I can offer you detailed tasting notes on. It’s a bit sweet, has nice malt character, a touch of bitterness, and it goes great with TX BBQ and live music. At 4.4% ABV you can drink it all night. I think Lemmy, Taylor and Clarke would approve of this pairing. I guess it remains to be seen if see if their fans do.