I’ve been involved in underground black metal for well over twenty years now. I find a lot of meaning and value in its tradition and aesthetics, the mystery and spirituality behind much of its core values.  But, like everything, the inability to find humor in the darker corners and crevices denotes a lack of emotional depth. Also, let’s face it, sometimes it can be pretty fucking stupid. I’ve been pondering the latter for a bit and took to the sewer of the internet, my Facebook page, for suggestions and boy you guys didn’t disappoint. I’ve left out some of the more popular ones like every variation of the Thor’s Hammer record (because redundant) or the Mutiilation record with the wheelchair (because it’s awesome).

I understand art is a subjective thing so there may be some reasonable conversation regarding this piece where I’m called a “cuck” or some other zany contemporary display of affection. You may feel I have been unfair to some of these or missed a few that are worse. In this instance we’re all #blessed that we don’t have a shared sense of taste. Since I’ve been accused of being too wordy and attention spans these days are at E on the gauge I’ve split this into two parts. You’re welcome.

It would also be easy to mention some of the contemporary takes (mostly by Americans because we fuck everything up) but I’m better than that. Ancient are a great example of starting strong out the gate and then rolling your ankle halfway around the track and then shitting your pants in front of the whole stadium, on national TV. While I could just copy their Wikipedia entry as the joke and end it there, I feel it wouldn’t be doing justice to the majesty that is this special picnic. It was like they took Cradle of Filth’s ridiculous promo photos of them eating that obviously bored model and decided that it would complete the aesthetic that having a member named Jesus Christ! deserved. This record cover was laughed at when it was released in the ’90s, which is like having the smallest dick at a child’s birthday party. I think this record had a few jammers on it but I’m too embarrassed just to have the cover on my search history to actually listen to it. I remember getting this in the mail and wondering if there had been a mistake and I had accidentally sponsored a slow kid for only pennies a day. The record itself actually sounds like the aesthetic presented on the cover, primitive and without any disregard for anyone’s appreciation of it but the band itself. This was a pretty cool record that wore its heart on its sleeve and somehow I lost my copy over the years so I decided to check it out on eBay and saw that people were paying over $100 for a copy. Just imagine, if you will, being so afraid of having a savings account that you said “fuck it” and spent three bills for the privilege of this cover art. There’s a lot to unpack with this cover so I’ll start with the breakables: Pervertum were a part of the ABMS (Austrian Black Metal Syndicate) which sounded scary at the time, and this is actually a pretty great record even if the snare sounds like a tennis ball being hit against a brick wall. I’ve always felt that certain covers with spooky folks in corpse paint could be done well (see: half of the Polish mid-’90s output unless that’s illegal in your country) but there should be some kind of unifying theme, which doesn’t really seem to be going on here, so I’ll try to create a backstory for you: the photographer was tired of trying to get them to emote so instead of squeaking a rubber toy like he does for other children he decided to pull his dick out (yes, I make a lot of dick jokes, thanks for the heads up). The gentleman holding the sword prop and his punk rock friend are obviously pissed, the guy who put the paint that should have been on his chin on his forehead is impressed, Tiny Tim is confused and the guy between 10:30 and midnight didn’t put paint on his neck because he didn’t want to fuck up his nice shirt. Still, great record. 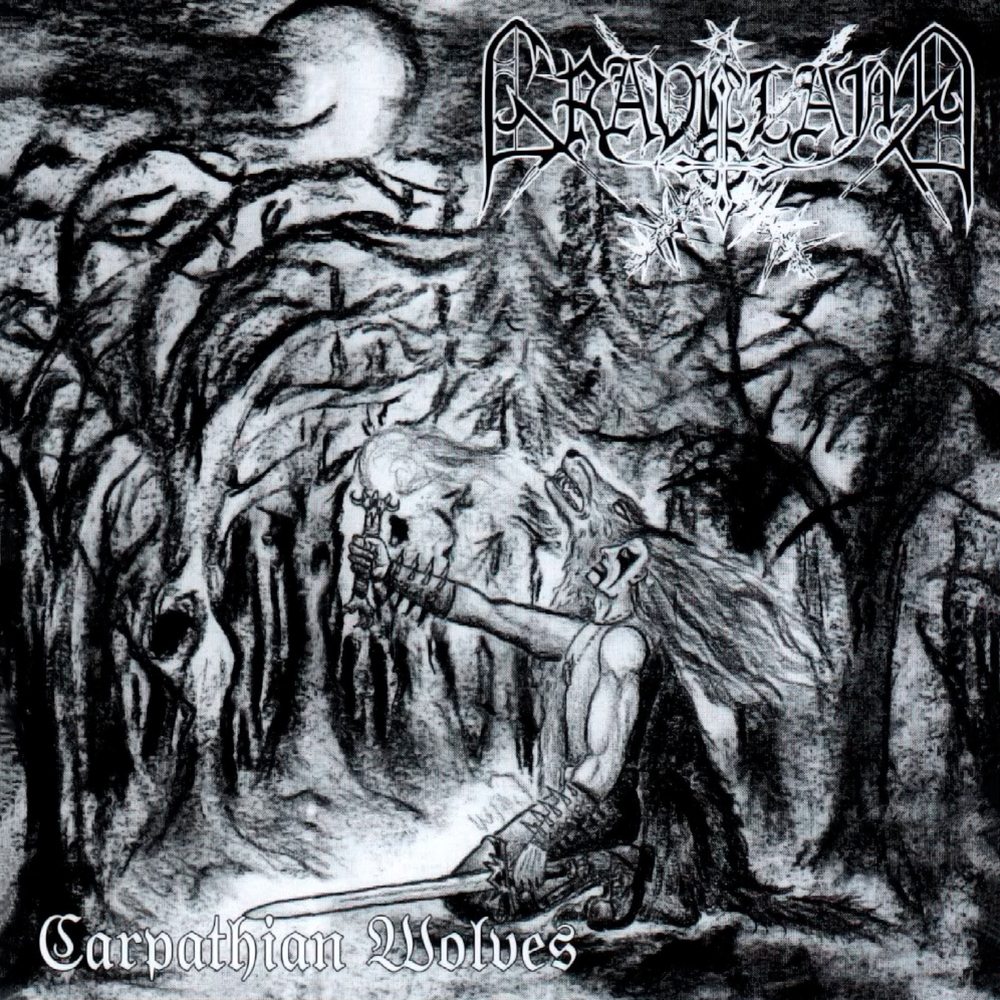 People have been asking me to write about Graveland since Antifa fucked up their Canadian show last year, so I guess this counts. Like about half of what I’m writing about this is a stellar record (you can report this at www.splcenter.org) which has a genuinely dark and mysterious atmosphere and no mention anywhere of cosplaying with Bigfoot or a bucket of little girls. But this fucking cover. I used to draw comics when I was a lot younger with the hopes of drawing as a career, and while I’d like to say a drug problem and other cool things derailed it, I would be lying. I had friends who told me I sucked and, for once in my life, I was smart enough to listen. Apparently the artist here had no friends. The sense of proportion alone is absurd (NSBM joke, get it?) but upon studying it further I’d say that if the spooky guy and his friend from Altered Beast weren’t in the picture it would work better, even if they didn’t color in the lines. 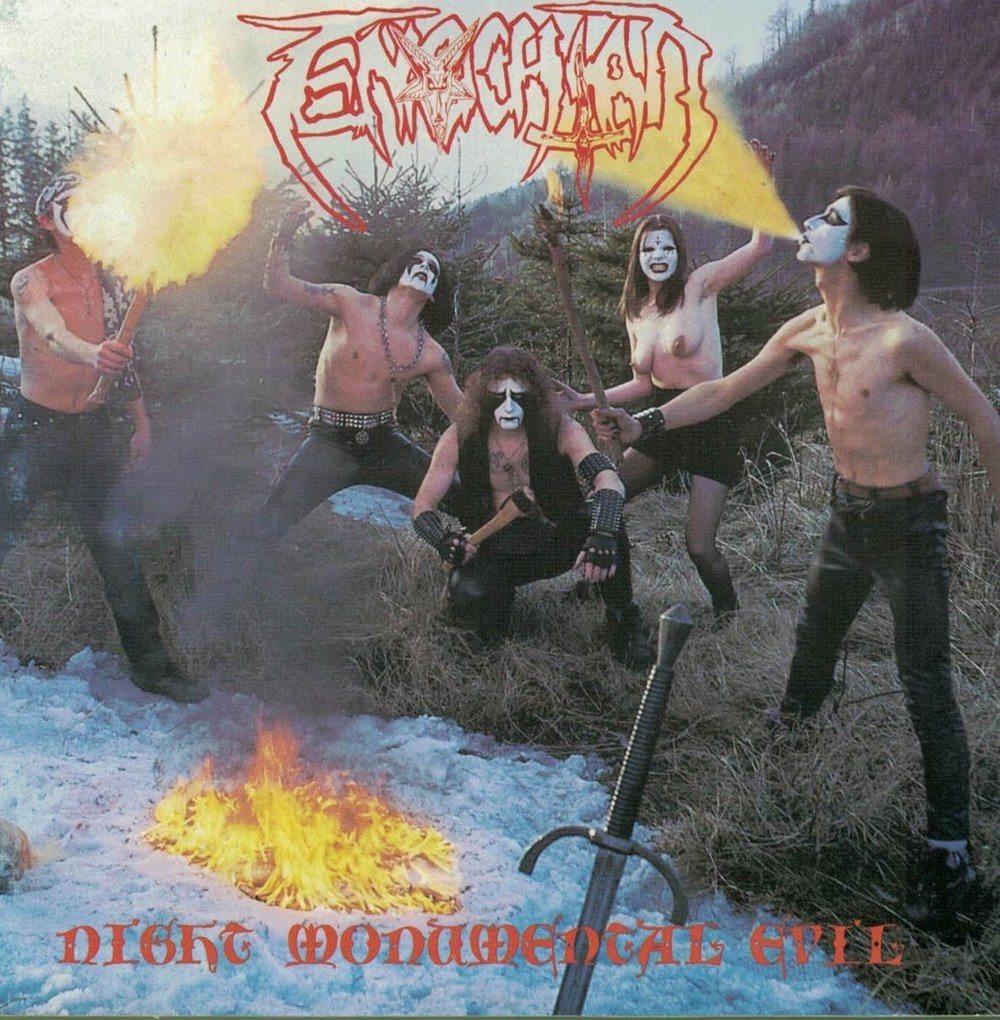 This set the bar so low in the ’90s for bad album covers that I’m pretty sure no one actually knows how this band sounds. This cover was spoken of in zines, on bulletin boards, in chat rooms, etc. as being “what was wrong with black metal.” And I can understand that: Czech band with Norse pseudonyms, a scary woman who appears if you got caught masturbating too much to help curb the problem, a shout out to Fenriz — who, I’m guessing, they didn’t know — a doo rag before Shining and inside one of the members is wearing a plastic fucking Viking helmet. Plastic. Fucking. Viking. Helmet. This was two fingers deep into the “every asshole who just started a band thought they were from Norway” thing where you’d get flyers like (and this was real) “true Norwegian black metal from Italy” so the atmosphere was littered with what you kids call “posers” but this one took the fucking cake. I guess they’re still active and going through their Metal Archives page it seems like covers were never their thing and their last album screams “I give up” with just the logo and album title.

Thus ends part one, but I figured as a post script I’d try and be fair and include two I’ve allowed to slip past. This is mostly a defensive move as I’m sure some of you had these queued up before you made it through the second paragraph: For some reason I thought this picture of me with my hair whipping into my face like God just farted on me was a nifty idea. Also, please note the sweet leather trenchcoat which was a lot of fun to own after Columbine, and the Burzum shirt which is now illegal in 48 states besides Alabama and Arizona. For reference this picture was taken in 1997 so no, I didn’t qualify to front Agalloch. Somehow Blake and I settled on what might be the first black metal selfie for our split thus creating a cover as impressive as taking your date to Applebees. I imagine the picture without a filter is considered a sex crime in some areas.