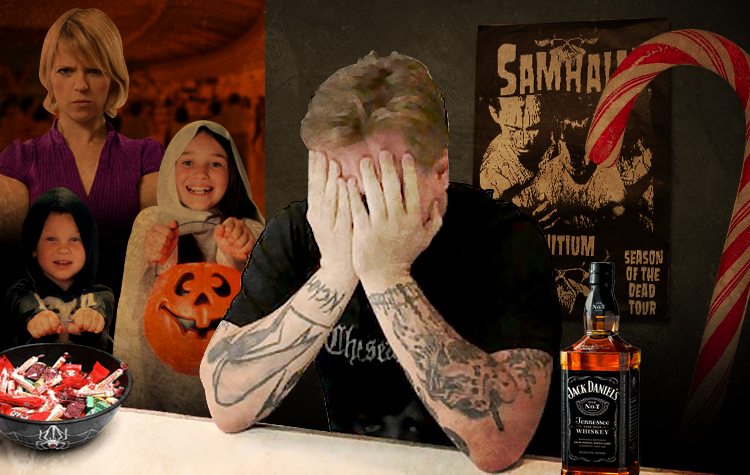 When I was a younger man I used to try to decorate my house in a morbid fashion and play Diamanda Galás and Burzum ambient (pre-incarceration, of course) pieces out of the windows in order to scare the shit out of kids, because the best trick or treating memories I had growing up were the houses that tried to fuck me up. Once I got a little older I started working at the Castle Dracula haunted attraction on the Wildwood boardwalk, so Halloween lasted from April to October 31st for me every year, except there was a paycheck and occasionally a drunk would punch me in the face (sort of like growing up, without the paycheck). And then I reached the age where adult responsibilities beckoned and Halloween started being a holiday where I was stuck behind the counter of whatever retail hell my dropping out of college awarded me.
That’s about as fun as it sounds.

When I worked at the record store the mall we were located in would do a trick or treat thing because the area was considered “unsafe” though I suspect the real reason is no kid wants to trick or treat on a street of ten houses where only two weren’t abandoned or foreclosed but I could be wrong, I don’t know shit about kids. So, each business was expected to provide its own candy and somehow stop normal operations to satisfy kids who barely gave enough of a shit to dress up (and whose parents would yell at you if you ran out early because your boss was too much of a penny pinching asshole to buy more than a bag). Little by little, Halloween began to die for me.

Last Halloween I worked at a behind glass store because, unlike the record store, this is a bad neighborhood and if you see someone come in with a mask your first reaction is to hit the panic button, not give them candy. It went smoothly but I needed a drink before, during and after.

This year I’m trying to regain a bit of my childlike enthusiasm for the holiday which, in the age of commodification of everything “special,” is a fucking challenge. I’ve come to realize that the dangers told to us in our youth about razors in candy and old men buggering kids dressed in Star Wars costumes instead of Star Trek aren’t the dangers of Halloween now. You have to worrying about kids with nut allergies unless you want to be brought up on murder charges because you gave out Reeses, which I’m sure will eventually be made into a Law & Order episode. Pretty soon pumpkins will be made illegal because carving them will offend pumpkins’ rights advocates. It’s a slippery slope. Is this candy gluten free? Fuck you. No one even eggs houses anymore because they only want to buy cage free organic eggs and that shit’s expensive.

I’m going to try to see some Halloween cover bands but I’m pretty sure I’ll just spend all night counting how many people did a Misfits cover and correct people by saying it’s the Samhain version.  Since it’s an election year I’ll also be counting the amount of Trump and Clinton costumes. Plus by the time Halloween actually rolls around every business will be covered in Christmas decorations like Santa just held a North Pole bukkake. I swear to god I went to the bank yesterday and they had candy canes. I can’t even enjoy a simple holiday without being bothered by things my therapist would tell me are trivial, if I could afford one.
In short, I ruin fun. Happy Halloween!