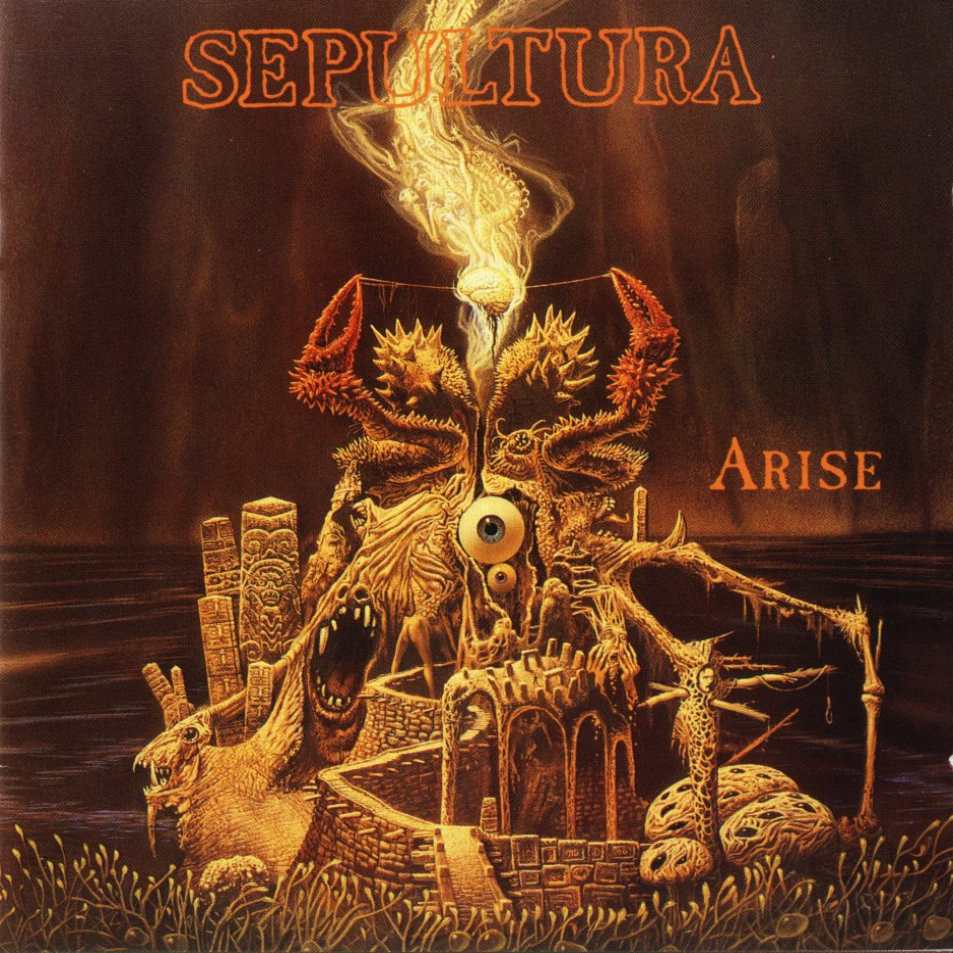 With three rock-solid releases preceding it (one of which is an undeniable first-ballot classic) and two, shall we say, polarizing releases following it, Arise is the sound of Sepultura finding their sweet spot. As Kevin Stewart-Panko details in his recent Hall of Fame article (you can purchase the issue here), the Brazilians were riding a creative wave of epic proportions in 1991—one that manifested itself into nine furious anthems of thrash/death metal that effortlessly stand the test of time more than two decades later. And regardless of how you feel about zabumbas and proto-nü metal, you gotta give credit where it’s due: this is one epic fucking album.

Ranking Arise from “worst to best” is borderline insane as every song completely rips, but here we go anyway:

9. Under Siege (Regnum Irae)
The acoustic guitar/reverb-soaked drum section that starts this song is a cool piece of dynamics in the context of the entire album, but the rest of the riffs just kind of float by without much character, and the mid-paced tempo is an ever-present reminder of the direction the boys would be headed in the near future. That d-beat part at 1:43 is pretty sick, though.

8. Meaningless Movements
I love the opening of this song—it reminds me of what Primus would sound like if Larry LaLonde took that Possessed thing a couple steps further. The mid-paced groove riffs aren’t terribly interesting, but all the d-beat thrash stuff and Slayer ride cymbal-ing is gold. Props to Kisser for that weird fucking solo, too.

7. Subtraction
“Subtraction” has one of the most effective choruses on the entire album (that little guitar line that follows along with Max’s vocal is a brilliant piece of layering), but let’s not forget the real star of the show: dat bass riff at 3:16. Even though Paulo didn’t play on the album, I gotta imagine he gets a big dumb smile on his face every time that part comes up during concerts.

6. Infected Voice
I can only imagine the violent circle pits that “Infected Voice” incited across the land in ’91—unfortunately, I was too busy rocking the Spin Doctors on my Walkman to make it to a metal concert. When Igor hits that cymbal swell at the beginning, you know exactly what’s coming next: an all-out assault on your pencil neck. What a way to end a fucking record.

5. Murder
The first of Arise’s “Big Four” to appear on this countdown, “Murder” is a perfect mix of everything that’s great about the album: aggressive, melodic, customized for maximum headbang-age. The transition into the first groove riff at 0:22 should be taught in Metal Composition 101, followed by a guest lecture on the effectiveness of Max’s phrasing throughout.

4. Altered State
Arise’s second-longest song is also its most dynamic, with an extended intro that features the Brazilian instrumentation and atmosphere that would become so vital to Sepultura’s career in the future. I love that air raid guitar noise that comes in at the 1:00 and 5:41 marks, and Igor’s double bass playing adds a crucial driving element to the mostly mid-paced riffs. Also, you can go fuck yourself if that breakdown at 5:01 doesn’t do anything for you.

3. Dead Embryonic Cells
I didn’t have MTV when I was a kid, so whenever I got the chance to watch at a friend’s house, you’d have to blast me with a pressure washer to get me to turn it off. Of course, Headbangers Ball was one of my favorites, and whenever “Dead Embryonic Cells” came on the screen (which was pretty goddamn often), I’d stop whatever I was doing and thrash around out of respect. A perfect storm of songwriting, creative riffing and youthful aggression, this is one of those all-time metal anthems that’ll never lose its potency…even though that riff at 3:34 is basically responsible for the entire metalcore genre.

2. Arise
In the pre-Internet days, if one of your favorite bands released a new album, there was a big old question mark as to whether it would be up to par…especially if that band played blistering heavy metal and had no radio presence whatsoever. So, how satisfying it must have been for Beneath the Remains-era Sepultura fans to show up at their local record stores, purchase this weird-looking album with a melty demon thing on the cover, slap it on their home stereo and sit back as motherfucking “Arise” trampled their feeble meat bodies into the ground. If you had to saddle pre-Roots Sepultura with a theme song, this would be on the short list. I see the world…dead!

1. Desperate Cry
Riffs. Riffs on riffs on riffs. The kind of riffs that make you break your wrist lunging for a pen when the Devil presents you with his Faustian contract. Riffs that you name after beloved family members. “Desperate Cry” has them all. It’s pointless to even single them out—this song is just one giant riff that’s designed to pummel everything in its path. A goddamn masterpiece that belongs in the heavy metal Smithsonian. Creation!