Almost every band has that album: you know, the critically and/or commercially reviled dud in an otherwise pretty damn good back catalog. In “Justify Your Shitty Taste,” a Decibel staffer or special guest will take to the Deciblog to bitch and moan at length as to why everybody’s full of shit and said dud is, in fact, The Shit. Today, Shawn Macomber gives it up for Ozzy’s pop-metal apotheosis The Ultimate Sin.

Sure, Jake E. Lee may have served with distinction during his tumultuous five-year tour of duty under General Sharon, summoning forth a mind-boggling cascade of super-solid riffage and shredding through the tears when he got fucked out of lucrative Bark at the Moon (1983) writing credits, but the guitarist nevertheless gets about as much love from the Osbourne camp as a circa-1982 bat.

Here, for example, are the only two sole mentions of Lee in Ozzy’s autobiography, I Am Ozzy:

No sooner had Aimee been born that it was time to go on the road again, this time to promote the Bark at the Moon record, which I’d just finished making with my new guitarist, Jake E. Lee…

I’ll never forget the moment when it was our turn to go on stage Jake E. Lee had just left the band and Zakk Wylde had taken over as lead guitarist. He was young, with ripped muscles and long blonde hair, and the second he walked out from the wings the entire place started to wolf-whistle and scream, “Bend over, little boy! Bend over, little boy!”

Okay, so, perhaps dis-membership has its privileges, depending on how E. L. James you prefer your metal. And, yeah, acknowledging Lee’s existence as a human being and musician is a sort of counterintuitive sign of respect in the Land of Ozz — just ask Bob Daisley and Lee Kerslake.

Still, it’s more than a bit galling to see Lee go so unsung. Stepping in for the fallen Randy Rhodes could not have been a cakewalk — either in the practice room with a chemically-imbalanced, willing-to-strangle-his-wife era Ozzy or before grieving fans.

Here’s a fact: Lee killed it, respecting Rhoads’ exuberant maelstrom in live renditions of Diary of a Madman and Blizzard of Ozz tracks, but establishing himself as his own man in new compositions, steadily building up one harder-side-of-pop-rock sonic structure after another like the best heavy metal bricklayer in town.

Straight up, Ozzy got lucky with Lee. I’ll cop to loving the twenty percent of the Dokken oeuvre worth a shit. There isn’t anything on Tooth and Nail or in the Lynch Mob back catalog, alas, that suggests to me the initial frontrunner for Rhoads’ replacement, George Lynch, would have pulled off tuneage anywhere near as Ozzy-appropriate as what Lee delivered. That’s before we even take note of the Osbournes’ shitty, stupid criteria for finding the next Rhoads, as believably recounted here by Lynch:

Initially, the one negative I heard from their camp was that Sharon thought my guitar looked like a booger. I had this green and black Tiger, actually the first Tiger I had made before I made my yellow-and-black one and I thought it was a pretty silly reason. Also, Ozzy came into my hotel room at one point and he said, ‘Why did you cut your hair?’ He was really bummed that I had short hair. I was actually doing a day gig as a liquor delivery driver and I couldn’t have long hair, so I had to cut my hair. I could’ve bought a wig but he was bald at the time, so his argument didn’t carry a lot of weight with me. So there were those two things. Yeah, I think it was image for them.

Which is to say, Ozz Corp probably should’ve worshipped at Lee’s axe altar every morning and evening to honor the guitarist for saving an adrift Ozzy from solo disaster rather than (allegedly!) firing him by telegram for asking for a fair royalty accommodation and bringing in the aforementioned false harmonic-adoring, ripped Wylde child. (Don’t get me wrong, I loved Wylde’s seminal work on American Idol, but….)

All of this brings us to The Ultimate Sin, which not only features Ozzy’s most endearingly Dungeons & Dragons-esque “Prince of Darkness” cover but also his last batch of straightforward metal songs before he descended into a sometimes-it-works-sometimes-it-doesn’t hell of cloying, multi-genre hit chasing. 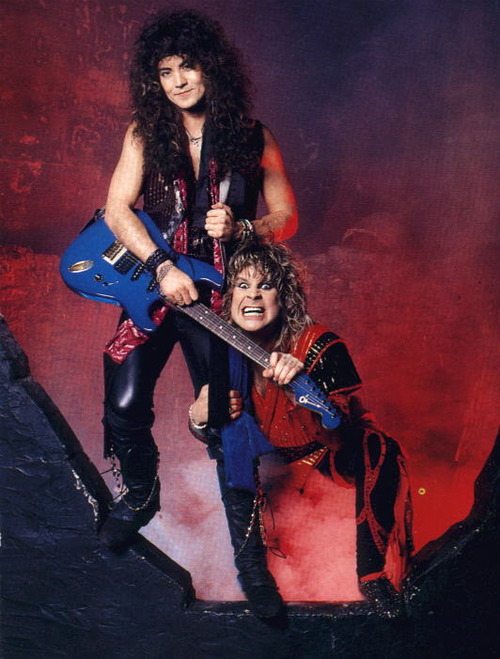 Why The Ultimate Sin is not as well-respected as Bark at the Moon is something of a mystery — judged by awesome title-tracks alone, the latter might have a slim edge. The former, however, is song for song — aside from the cringer “Secret Loser”(!) — the more solid record; a real growing-pains-are-behind-us, meat and potatoes pop metal record full of flawless riffs and tasteful solos, unpretentious virtuosity and modest, serve-the-songs wisdom.

It’s high time The Ultimate Sin gets it’s ultimate due. There are many other Ozzy solo records that are less deserving of the deluxe reissue treatment than Lee’s workman-like masterpiece.

Will General Sharon ever come around to the idea? It seems unlikely.

Then again, if time has proven anything it is that The Ultimate Sin has the potential to be that shot in the dark, always creeping up on you…