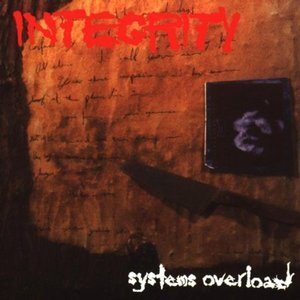 Much of the music borne of this exodus was sublime. Nevertheless, like yin stalking yang, not everyone got caught up chasing sunbeams and less oppressive atmospheres.

Indeed, those wondering what it will sound like when the Lamb finally gets around to breaking seals need look no further than Integrity’s disquieting-and-galvanizing-in-equal-measure 1991 debut Those Who Fear Tomorrow. Yet portent necessarily precedes tribulation, and it is the 1995 sophomore magnum opus Systems Overload that fully actualized the singular, game-changing union of ferocious metallic hardcore sturm und drang, unlikely stylistic fusions—the gorgeous otherworldly intro to “Armenian Persecution”; the near-glammy flashes and bluesy midsection of “Salvations Malevolence”—and unbridled, across-all-fronts rebellion.

Amidst this apocalyptic aural tableau stood one of extreme art’s few true iconoclasts, the fiery prophet/provocateur Dwid Hellion, a malevolent reincarnation of Joshua with a ram’s horn throat bellowing at the crumbling walls of perception until listeners were left immersed in a world that resembles one of the vocalist’s Goya-esque paintings.

Systems Overload is the landmark work in a grand and heretical oeuvre. To get the full story of its creation, Decibel spoke to the four men responsible for the recording—Hellion, boundary-annihilating axeman Aaron Melnick, bassist Leon Melnick and drummer Mark Konopka—as well as guitarists Chris Smith (Keelhaul, Inmates), who helped write some of the material in the run-up, and Frank Novinec (ex-Ringworm, ex-Terror, current Hatebreed), who was present for the recording and joined the band shortly afterward.