We’ll make this into concise as possible, so as to allow readers to break on through to the other side that much quicker: A) False Prism and Cavern Apothecary — presented by Sadgiqacea and Hivelords respectively — are two of the best, most intriguing mindfuck metal releases of the year thus far. B) The bands are currently on tour together. C) A mysterious scribe amongst them identified as “The Portalist” has sent along this account of the ensuing madness.

July 5th: Montclaire Meatfest. Open Locker Blitz. Beer-gut coma induction. Our insides swapped with a blunt’s. So dark for Haethan, and suitably invoking. Candlelight dwarfed by a shoulder-cannon firing VHS rounds. What’s in the fridge to the side? UBASUTE beef, bloody and brilliant all at once.

July 6th: “What’s that smell?” a nubile Baby Dragon asked innocently, his tear-laden eyeshimmer competing with forehead sweatbeads. Eleven piss-hot bodies poured and splashed in a wet, incoherent language, searching for a response. Time dripped there. “That smoke better be coming from the car in front of us.” In a van that was well accustomed to billowing smoke, a new hazy guest filled the chamber in a way meant to kill us all. Trapped inside a Butt Tunnel on the way to New York City and we had to open the rear doors until we broke down in front of a Here’s a Van For Now, Thanks For All The Money and Bring It Back Perfect. Get to Brooklyn. Warehouse district. Need anything? asks Doug of the Acheron, and he shall provide. Haethen amid smoke replaces my bones with Norwegian timber. Hivelords desecrates visible sanctum with scrawling sharp waves submerged in thunderous awe. Sadgiqacea warps the astral plane…again and again. Did you know you had a skull inside your head? No local band to close it out, alas; only in a perfect world.

July 8th: People not even fit for Harvard online courses have just soiled Cambridge. VYGR — a black galleon pillaging minds like pixie merchant ships. Sadge and Hive a damn psychic oil spill like “BP needs to clean THAT shit up.” The Proselyte cursing up a storm in a frequency meant for bats with tattoos and choppers. We got your soul…how you like THEM apples? Whiskey Werewolf like em. Hell, he finished the core and the cider before you were awake, so why pretend you’re not ready to swill Chartreuse straight and inhale the fruits of our own Planet until the sun interrupts?

July 9th: Made a left turn into a Stephen King novel. Creaking house set back from the others, aglow with cigarette tips in the dour must of numb years. A demon named Steven dwells there. Eastern Spells are cast, invoking them, inviting them to join the macabre foray. Hivelords and Sadgiqacea answer with black tongues and coal hearts. A wizard appeared, and with prophetic warmth urged the procession;

Bite a snake’s head off
And play some music

ZUD breaks the trans-dimensional seal and outsteps the Troma Realm. We are all covered in chicken’s blood, incense and roil now. Time to retire under the unsettlingly watchful eye of Vogue Werewolf and Captain Loverboy. July 10th: The smell of rotting whale carcass and burning blubber is masked by quaint brick and smiling locals. All seems to be well in New London, but did you truly prepare your aural defenses? Sadge and Hive blare siege on unsuspecting townfolk, and awesomely they join the fracas in sheer frenzy and delight. Alcoholocaust rained Natural Ice on burnt flesh and it did sting and cool simultaneous. After hours of proper bar jockeying and gracious hospitality, we were Pidgoen Holed for the night.

July 11th: Worcester to eat at Ralph’s and live forever. Zafakon from Puerto Rico — Puerto FUCKING Rico — and Untombed meet us to dine of the visceral slop of the Metal Faithful. A dank banquet ensued, and the festivities reached their zenith. Despite self-stroking reminders of who the gear belonged to, it was the trusted hired sword of Millen the Soundfather behind the board that smote the fevered ears and bowels of non-believers.

July 12th: Jamestown hosted us graciously. Sadly we missed Controlled By Fear in our 12 hour brainswap from Worcester to Vorhees to pick up Steely Dan and then to Jamestown. Ancients of Earth riffed us to Stonerdom and gave the Old Gods ideas of tenebrous haze. Sadge played two songs and the Land of Fog crossed our astral planar point, much to the chagrin of the local authorities. The Tamers of the Flame showed up on Dragons spitting red white and orange light. They banished the spirits from the Fog and thwarted the reverie. We still hang our heads about this unfortunate event to this day, and thank profusely those who supported regardless. July 13th: See you in the Pitt.These Dendritic horsemen ride steeds of booze and boards with wheels and do not quit. Microwaves melted our mental Tupperware. Hive and Sadg took the reins and did not relinquish a drop. Of the conditions induced were Malaise Head-heave, Violent Sway, WILD BILL, Shoulder Sag and Dismal Dementia. Lakshmeesingh spat fumes from years of oil refineries and steel mills, condensed in a fifteen-minute window. This night and following day in Pittsburgh was extra-ordinary, to which we owe a deep debt of gratitude we are looking forward to paying back.

July 14th: On the road to Columbus, and the Day of the Tour has only just dawned… 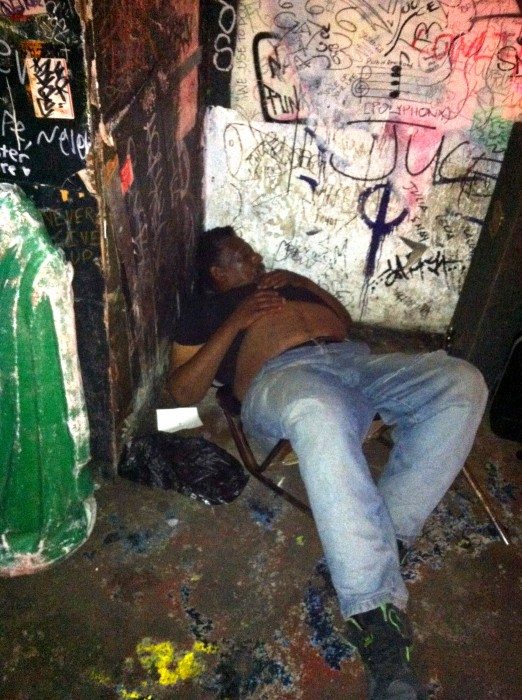