Almost every band has that album: you know, the critically and/or commercially reviled dud in an otherwise passable-to-radical back catalog. Well, every Wednesday morning, a Decibel staffer or special guest will take to the Deciblog to bitch and moan at length as to why everybody’s full of shit and said dud is, in fact, The Shit. Today, Adem Tepedelen revs up some hot greasy man-love for Motörhead‘s Another Perfect Day.
By our own estimation, Motörhead have made few musical missteps in their 35-plus years. Only Lemmy remains from the original lineup, but he has maintained a few different stable versions of the band over the years. Those periods of stability have generally produced the band’s best work. There’s certainly no denying what the Lemmy/Fast Eddie/Phil Taylor version achieved between 1975 and 1982, including recording the Decibel Hall of Fame classic, Ace of Spades. And the most recent, and longest-lived, incarnation of Lemmy/Phil Campbell/Mikkey Dee has definitely been producing some of their best work in the last decade.

And then there’s Another Perfect Day. Consider this the companion piece to Black Sabbath’s Born Again (also recently covered here in JYST by Greg Moffitt). It was released in the same year, 1983, and like Born Again, it features a rather unlikely lineup, and cover art that looked like it was created by an acid casualty. 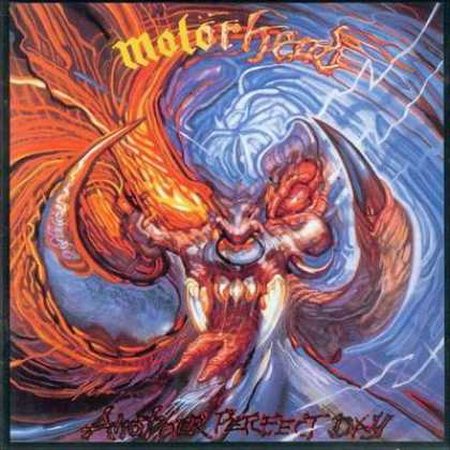 Though Born Again featured a more ostensibly dramatic change—vocalist Ronnie James Dio was replaced by Deep Purple’s Ian Gillan—the addition of former Thin Lizzy/Wild Horses guitarist Brian Robertson on Another Perfect Day turned out to be equally jarring. And why wouldn’t it? Nothing in Robertson’s previous experience suggested he would be a good fit for Motörhead. We’re not here to question Robertson’s chops; he was part of the two-guitar tandem that recorded some of Lizzy’s finest albums in the ’70s. But he clearly wasn’t Motörhead material. Certainly not the way he looked, and image was a key ingredient in Motörhead’s appeal. Not surprisingly, this is without a doubt one of the strangest records in the band’s entire discography. It is un-Motörhead-like in so many ways. Robertson clearly had no intention of being a “team player” (he even refused to play any Motörhead classics while on tour supporting APD) and basically just brought his own aesthetic to a well-established band that already had a stone-cold classic to its name.

Ironically, this is why APD is a Motörhead album worth defending. It’s like an issue of Marvel Comics What If? where we get to imagine what it would be like if, for instance, Spider-Man had been part of the Fantastic Four. Imagine that: a Thin Lizzy guitarist in Motörhead. Fans of either band at the time would have known it would be, uh, odd, but who knew it would be compellingly so.

To say that the two camps—Lemmy and Taylor on one side, Robertson on the other—didn’t mesh is being kind. This is a good album in spite of itself. It’s only a Motörhead album in that Lemmy plays bass and sings on it (which is how it has always been, but never as glaringly so as here). That is to say, the band does things sound-wise that you’ll never likely hear on another Motörhead album. And, in fact, after Robertson left, not long after the album was released, the band didn’t play any of this material live until 2004, when a few of the “hits”—“Shine,” “I Got Mine” and the title track—were trotted out. This is an album that even Motörhead weren’t exactly crazy about.

As evidenced in “I Got Mine,” one of the singles released from APD, two distinct things distinguish Robertson from the Fast One. The first is Robertson’s penchant for melodic, picked, open-note chords. The second is his love of guitar effect pedals and proclivity toward filling as much possible space in each song with soaring, echoic solos punctuated with frantic, trilling hammer-ons using a pick. We don’t know if it’s a flanger or chorus pedal or what, but “Dancing on Your Grave,” “One Track Mind,” the title track and other cuts feature guitar sounds that were certainly not heard on previous Motörhead albums, and probably haven’t been heard since.

The salvo of distorted bass notes that kick off the album in “Back at the Funny Farm” give the false impression that everything is business as usual in Motörhead, until Robertson’s reverb-drenched guitar adds a rather different impression of the proceedings. Later in the album, the rather viciously titled “Die You Bastard” follows a similar pattern: blasting bass intro that segues to cascading, ’verbed-out guitar notes that sound as though Robertson didn’t either know the title of the song, or just decided to throw in a little nod to U2’s the Edge, just for laughs. It’s strange, it’s brilliant. And it barely feels like Motörhead.

And that’s what APD is about from start to finish. One is repeatedly shocked by the clearly atypical—dare we say melodic—material that Lemmy and Taylor had to play with. The crazy thing is that it works more times than not. This is by no means Motörhead’s best album, but with the odds stacked against it being anything but a complete disaster, it manages to be quite an interesting version of the band.

Perhaps what made this union even slightly feasible is that Robertson’s playing style was very heavily blues-based/-influenced like Fast Eddie’s. The differences between the two really boiled down to technical proficiency (with the edge clearly going to Robertson) and probably the kinds of stimulants/intoxicants each favored. Near as we can figure, the problem was that Robertson just didn’t do enough speed. And his pension for wearing outfits that gave the impression that he’d just finished a session with a Jane Fonda Workout video certainly didn’t help.

If Ace of Spades is arguably Motörhead’s pinnacle, Another Perfect Day is like the inevitable stumble on the way back down. It was an epically bad decision—the hiring of Robertson—that quite fortuitously resulted in a curiosity rather than monstrosity in the Motörhead catalog. The rapid decision to part ways shortly after its release probably saved the band, as it was clear that Robertson was not Motörhead material. But, to his credit, he brought something to the band that was of-the-era and made Another Perfect Day one of the most intriguing albums in their entire catalog.