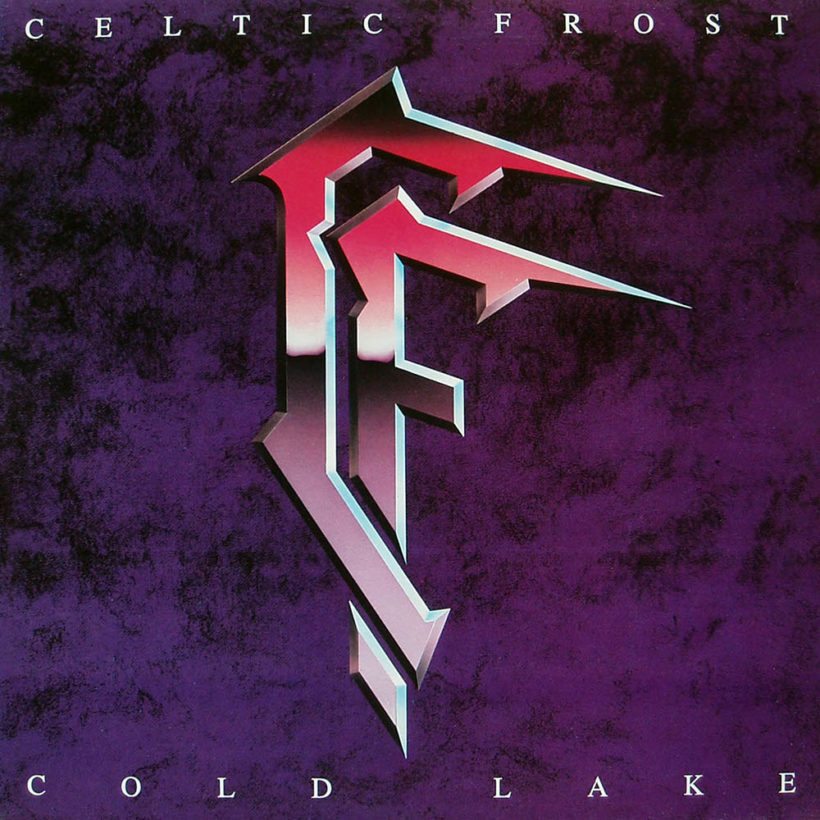 Almost every band has that album: you know, the critically and/or commercially reviled dud in an otherwise passable-to-radical back catalog. Well, every now and then, a Decibel staffer or special guest will take to the site to bitch and moan at length as to why everybody’s full of shit and said dud is, in fact, The Shit. Today, J. Bennett goes between the white lines to give Cold Lake a posthumous glamour shot.

Don’t act so surprised, Grasshopper. You knew this was coming eventually. Once Panko hauled out what we can only imagine to be his enormous ballbag in defense of St. Anger, you knew shit was gonna get ridiculous up in this piece. And nothing says ridiculous quite like Tom Warrior with blown-out hair, fingerless white gloves and frosted pink lip gloss, croaking about “the mirage of love” on a song—a Celtic Frost song—called “Dance Sleazy.” Did we mention the acid-wash Canadian tuxedo he’s rocking on the back cover? There’s a word for it, and that word is resplendent.

The year was 1988 and Warrior’s partner in po-faced Puritanism, Martin Ain, was nowhere to be found. Drummer Reed St. Mark had split as well, ostensibly to join former Nirvana and Soundgarden sideman Jason Everman in Mindfunk. What Celtic Frost fans got on Cold Lake was an entirely different lineup than the one that had made the colossally bad decision to cover Wall of Voodoo’s “Mexican Radio” on 1987’s Into the Pandemonium. Incredibly, Warrior’s Cold Lake cock-rock posse consisted of former Coroner guitarist Oliver Amberg, original Frost drummer Stephen Priestly, and a bassist named Curt Victor Bryant, whose most notable contribution to Cold Lake was the hellish tangle of unsightly man-bush protruding from his unzipped jeans (also acid wash) on the back cover. To make matters somehow even worse, Warrior dropped his nom de guerre on this release and used his porn name, “Thomas Gabriel.” All of this may or may not have been the handiwork of his then-girlfriend, Michelle Villanueva, who is credited as “wardrobe and styling artist” on Cold Lake, contributed “backing vocals” on several tracks and even has a co-writing credit on the song “Blood on Kisses.” Which is one of three songs on this record (see also: “Juices Like Wine” and “Little Velvet”) I will not even attempt to defend. Because they suck.

To say that Cold Lake was—and is—critically reviled is a whopping understatement on par with “Houston, we have a problem.” Don’t quote us on this, but it’s possible that Metal Forces—who famously gave Into the Pandemonium a fucking zero—even called Celtic Frost “a bunch of no-talent homos” when this baby came out looking all purple, stillborn and faggy. For criticism more grounded in something I didn’t just make up, cruise over to metal-archives.com and check that 4% rating. That’s the average of four absolutely scintillating reviews. Point is, Frost diehards were/are bummed because it seemed like the band responsible for the unbridled proto-black metal awesomeness of Morbid Tales, Emperor’s Return and To Mega Therion had morphed into a pack of preening coke-metal pussies. Moreover, it seemed like a meticulously calculated move. It’s not like Warrior woke up one morning with jizz in his hair and a Trixter album under his arm. Trixter’s debut didn’t come out for another two years.

It’s telling that Cold Lake is the only one of the original five Celtic Frost albums to not be re-released in 1999: Warrior bemoans its existence to this day. But here’s my theory: Change the lyrics and the band photo, and Cold Lake wouldn’t have got shit on nearly as hard as it did (and does). Admittedly, the album goes down a lot smoother if you happen to like cock rock—not Firehouse- or Warrant-style (incidentally, Cold Lake preceded the debuts of both bands), but of the completely righteous speed ‘n’ spikes variety found on the first two Mötley Crüe albums. Let’s face it: Despite any perceived attempts to the contrary, it’s not like Cold Lake contained anything even remotely as bubblegum as Poison’s Open Up and Say… Ahh!, which was the top-selling cock-rock album released that year. Still, it’s unfortunate that Cold Lake opens with an intro called “Human,” just like the re-mastered version of Morbid Tales eventually would. It’s also a drag that this “Human” sounds like Anthrax rehearsing “I’m the Man” over a badly played version of the Seinfeld theme. But again, at least Cold Lake sucked first, beating Seinfeld to your face by like a year and a half.

Luckily, it’s all (mostly) uphill from there. Over the vaguely Led-Zeppelin-esque riffage of proper opener “Seduce Me Tonight,” Warrior/Gabriel implores that special lady—or any lady, really—to “dance on his wounded chest.” Sounds decidedly un-Frost-like, perhaps, but is it really all that different from the lyrics he’s writing in Triptykon these days? Let’s examine a passage from the title track of last year’s Shatter EP:

Case closed on that one.

Meanwhile, “Petty Obsession” is full of the type of killer, vaguely proggy metal riffs that Dave Mustaine used to write while shooting speedballs between his toes. In fact, I guarantee you that if this exact song had appeared on Megadeth’s So Far, So Good… So What!—also released in ’88—nobody would have batted a fucking eyelash. Come to think of it, parts of this jam also sound kinda like Voivod. Either way, the song features the least-cringe-worthy lyrics on the entire album. “If this is heaven,” Warrior/Gabriel asks us, “How bad is hell?” The answer is obvious: Not nearly as bad as your cover of “Mexican Radio.”

Go ahead and deny that opening riff on “Cherry Orchards,” while you’re at it. Oh, wait—you can’t. Mostly because it’s a Diamond Head riff. Similarly, if “Roses Without Thorns” had appeared on any of the first three Frost albums with almost any other set of lyrics attached, you would be talking about it right now like it just gave you a reach-around in the men’s room. Which it probably would, if you asked nicely. And shared some of that coke you’re pretending not to have.

We would be remiss if we didn’t give at least a cursory nod to the premium glam-thrash riffery of “Downtown Hanoi.” If you like early Mötley Crüe, how exactly does this song suck? I know what you’re going to say: Celtic Frost fans circa 1988 hated the Crüe. Which is probably true. But this review isn’t about defending their shitty taste, is it?

Which brings us back to “Dance Sleazy.” Would you hate it as much if Warrior/Gabriel wasn’t begging you or some other insecure Thai lady-boy to really go to town on that stripper pole? The answer is clearly no, you would not.

Of course, a quick glance at the Cold Lake writing credits reveals that Amberg, a.k.a. That Dude Who Used to Be in Coroner, wrote the majority of the music, so the argument could just as easily be made that Cold Lake was never a true Celtic Frost album to begin with. Which is just one of the many reasons (see above gibberish) you should re-evaluate your position on this vastly underrated semi-gem, assuming you even have one to begin with. If you haven’t heard it yet, I’ll sell you my copy.