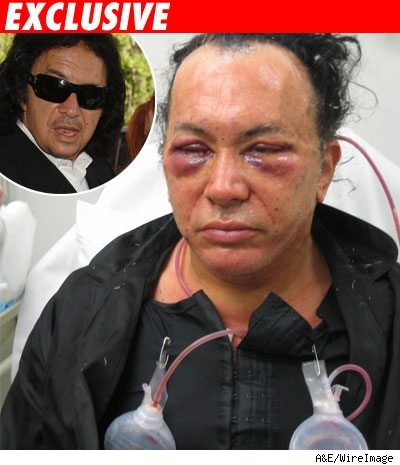 Gene Simmons, an old prick who’s subsisted for the last thirty six years on piles of cash, gross sex and arrogance, thinks people on the internet are analogous to laser-pointing fans at his shows. He assumes with a few belches from his makeup-covered, distended belly, he can scare people into following his commands and be cheered for it. Try and guess how this ends.

The story started a few days ago, but is unlikely over because 4chan “hackers” have nothing better to do and, suprisingly, neither does Gene Simmons.  See, a couple weeks ago The Demon said: “Be litigious. Sue everybody. Take their homes, their cars.” This is what he wants the music industry to do to everyone who’s ever downloaded music. I’m pretty sure he means literally everyone. But the music industry itself “didn’t have the balls to sue every fresh-faced, freckle-faced college kid who downloaded material. And so now we’re left with hundreds of thousands of people without jobs. There’s no industry.”

Internet justice came swiftly as haxxors went after him, fucked up his websites and congratulated themselves. Then when the sites got back online Simmons vomited in their direction with a bunch of nonsensical gray-haired talk:

Some of you may have heard a few popcorn farts re: our sites being threatened by hackers.
Our legal team and the FBI have been on the case and we have found a few, shall we say “adventurous” young people, who feel they are above the law.
And, as stated in my MIPCOM speech, we will sue their pants off.
First, they will be punished.
Second, they might find their little butts in jail, right next to someone who’s been there for years and is looking for a new girl friend.
We will soon be printing their names and pictures.
We will find you.
You cannot hide.
Stay tuned

So they understandably took down the sites again. Lucky for us, they’re back up at the moment so you can see the man try to sell the fillings from his kids’ teeth and spout a bunch of ignorant shit about immigration. And I hope you like photos of him playing Guitar Hero.

Anyways, Gene Simmons remains tied with Lou Reed as biggest musical cocksucker and I hate him. Who here wants to hate him with me?