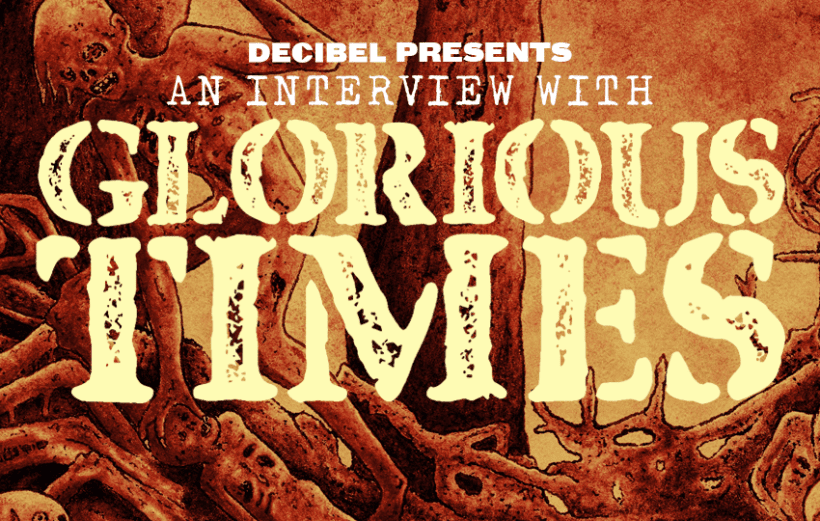 Glorious Times is a book that celebrates death metal. Officially sub-titled, A Pictorial Of The Death Metal Scene 1984-1991, the book features killer excerpts and hard-to-find photographs from our beloved genre’s earliest, most gnarliest stages. Co-authored by Alan Moses (once in the Morbid Angel orbit) and Brian Pattison (editor of Chainsaw Abortions ‘zine; guitarist in Anthropic), Glorious Times is now in its third edition published by Greece-based Fryktos Books. Pattison, however, sadly passed just before getting to see his labor of love in its third pressing in November 2020. Now, his younger brother Matt has taken the reins as Glorious Times Productions, and is organizing a plethora of activities on behalf of Brian.

First and foremost, Matt is taking Glorious Times to the physical music world. Working with Canada’s CDN Records, the Glorious Times CD features some of Brian’s closest friends from the death metal scene. They include: Cannibal Corpse, Master, Revenant, Massacre, Derketa, Acheron, Slaughter, Broken Hope, Deceased, Nunslaughter, Lethal Aggression, Wehrmacht, and Anthropic, featuring Kam Lee. As part of Matt’s pledge to honor his brother, who also organized the infamous (and pivotal) A Day of Death in 1990, he’s going to be putting on several death metal festivals in Buffalo, firstly the Death in December festival (with Ringworm headlining) on December 17th and the A Day of Death IV in July 2023. Proceeds from Matt’s endeavors will go to the Roswell Park Comprehensive Cancer Center in Buffalo.

Decibel sat down with Matt to honor Brian’s legacy.

What prompted you to issue Glorious Times as a CD?
Matt Pattison: My brother had always told me how he always wanted to put together a Glorious Times CD. Doing the book when he did he said it would be impossible to get most of the bands to contribute, whether it was they had gotten too big or were just too busy with their own thing. When my brother passed it hit me hard, but all the outpouring of condolences from people all over the world was amazing. It inspired me to not want to let my brother’s passing be the end of his legacy.

My brother would always say he was lucky enough to be a part of and witness the birth of a genre of death metal. I then began to think of what I could do to continue to keep his legacy alive. In talking with Kam Lee about the Glorious Times 4th Edition tribute to Brian I was putting together, he asked me if I thought about doing a Glorious Times album. That was all I needed. I began to look into a label that would be willing to do it, and what I wanted the album to look like. Then began contacting bands to see if any would be interested.

The Glorious Times CD is the successor (or soundtrack) to the Glorious Times book by Alan Moses and your brother Brian Pattison. Tell me about how the book and the CD complement one another.
Matt Pattison: That’s a great question, as my friend Cam Alfred Schwartz said, “For the younger generation and us older to know where we came from.” I think it was great to have an amazing group of bands from the book to put a comp CD together in honor of Brian. Anyone that is a metal fan the book and CD are a must to own. CDN records is releasing the album. I would like to thank CDN and Cam Alfred Schwarz and Craig Newman for taking this journey with me. They are amazing, and I can’t thank them enough.

How did the band selection come together? You have a lot of heavy hitters like Cannibal Corpse, Broken Hope, Massacre, and Deceased on there, plus a lot of great underground favorites like Lethal Aggression, Derketa, and Master.
Matt Pattison: The selection of the bands was an easy one. After my brother had passed many people from the scene to band members of many bands contacted me with condolences and stories. So, I just contacted all these bands. Once I contacted them they were all so eager to contribute a track. My brother would always say how the metal underground was a close family. This project proved it. Alex Webster of Cannibal Corpse was a good friend of my brother (and has become a brother to me) was helpful right away, and quickly the whole band and Metal Blade agreed. King from Deceased did the same thing and as well as Paul Speckmann from Master. All the bands have been amazing and I truly love them all. They are forever my family. The bands on this album are Cannibal Corpse, Master, Massacre, Acheron, the Vincent Crowley Band, Anthropic (feat. Kam Lee), Hideous Mangleous, Broken Hope, Deceased, Derketa, Revenant, Lethal Aggression, Insanity, Wehrmacht, Nunslaughter, and Slaughter.

Your brother, Brian, passed in November 2020. Do you consider both the book and CD as testaments to his legacy?
Matt Pattison: I do. But I believe his legacy is much more. The book brought new life to the metal underground. But he spent his whole life helping the underground scene. From the start of Death, to the day of A Day of Death. He would put on shows and bring bands to Buffalo like he would tell me he would have amazing bands play in the early days that would later become huge to where he could not afford them. Bands like Deceased he would always promote and have shows with them all the way to the end of his life. King, he looked up to. He was a legend in Brian’s eyes. Brian would also do a show called Death in December, which I have partnered with Jeff Standish and Coming of Rage Productions to bring back on December 17, 2022 with Ringworm as the headliner. The band Brian founded Anthropic, also Centenary, Gutted Alive, and Juggernaut. Amazing bands like Cannibal Corpse, Autopsy, Prime Evil, Immolation, Insanity, Metal Blade Records, and Jeremy Wagner have donated merch to raffle at the shows. The show is also a Glorious Times album release party. It’s Brian’s dedication and love for the music, the metal underground, and his generosity and care to help anyone in need. My brother put on benefit shows to help a lot of people and bands in the scene that needed some help. That is why everything I do in my brother’s name I do not make any profit. That is what my brother would want.

Is the Glorious Times book still available? And where can U.S. readers get a copy?
Matt Pattison: Yes, but sadly not in the U.S. Before Brian passed away he made a deal with Fryktos Books in Greece to publish a third edition of the book with a new cover. The shipment of the new edition arrived at my house two days before he passed. I called him at the hospital the day it came in, and, as he was a man of many words when I told him, he said, “Cool.” He passed away before he was able to open the package. I opened it shortly after he passed to see the books. Luckily, I found the list he made of the people who prepaid for books and I was able to ship them out. I put together a tribute Glorious Times edition with memorial pages added. Published by Fryktos Books as well. They are only available in Europe through them.

For those that remember, Brian also organized the A Day of Death festival in 1990. What are your memories of Brian’s (and yours) involvement in that legendary festival?
Matt Pattison: I was very young. I remember my brother had the fanzine Chainsaw Abortions. He was always doing interviews with bands and promoting their CDs or shows. Then, Joe Pristach decided to put on the A Day of Death since Brian and Joe knew everybody in the scene they just contacted them and put the show on. A Day of Death put a spotlight on the death metal scene; at the time Buffalo was the epicenter of the metal underground. Unfortunately my parents would not allow me to go. Fucking parents in the ’80s and ’90s. I partnered with Ed Farshtey of Armageddon Production and put on the Day of Death III on April 23, 2022 in Brooklyn with Massacre, Incantation, Anthropic, Malignancy, Nunslaughter, Deceased, Embalmer, and Sewage Grinder.

You’re going to hold Day of Death IV in July 2023 in honor of your brother. Tell me about who’s involved, bands that are playing, and what you’re aiming for.
Matt Pattison: On July 15, 2023, which is Brian’s birthday, I will be putting on Day of Death IV in Buffalo. It will be me, Glorious Times Productions. I have partnered with Jeff Standish and Coming of Rage Productions. The show is in the early stages, but what I can say is the lineup is epic. Everyone from across the country should save the date and make plans to come to Buffalo on July 15th. Come and pay homage and your respects to the metal underground pioneer Brian Pattison and see an amazing show with some legendary bands. I will be announcing the lineup soon. I have bands that are already committed, but they want to wait until everything is set. Of course, Brian’s band Anthropic will be performing. Anyone that is in the metal underground scene will want to be a part of this. You can check my Facebook at MattandDanielle Pattison and also Coming of Rage Productions for announcements. All I can say right now is… “Wow!” You won’t want to miss this.

The CD and festival proceeds will go to the Roswell Park Comprehensive Cancer Center in Buffalo. Tell us why Roswell Park is special to you.
Matt Pattison: My brother lost over 26 people to cancer in the last few years of his life. He put together hundreds of benefit shows, including one for Bret Hoffmann of Malevolent Creation before Bret passed. Also a benefit for his good friend Jen Rinaldo, which turned into a yearly event after she passed. Brian had shirts made that said, “Fuck cancer.” He was known as the, “Fuck cancer,” guy. I felt I needed to continue that by donating all profits to Roswell. I feel I can not make money off of my brother’s legacy. I have taken over Glorious Times Productions. I want people to understand that every time they see Glorious Times is involved that whatever it is, it is to raise money to help others. If someone in the scene needs help, they should feel free to contact me and maybe Glorious Times can put something together to help.

How do you want Brian remembered?
Matt Pattison: I want Brian to be remembered as a kind person. I want him to be remembered as one of the people that helped build the metal underground and death metal scene. I want all his selfless work and all the benefits he did to help others. For his A Day of Death fest, his Glorious Times book and, of course, his band Anthropic. He gave everything to the scene and never asked for anything in return. I want him to be remembered as the metal pioneer and legend that he is. I miss my big brother and I know the world misses him also. Pattison Eternal. I hope this inspires some new blood to the scene. Thank you Decibel for your support.