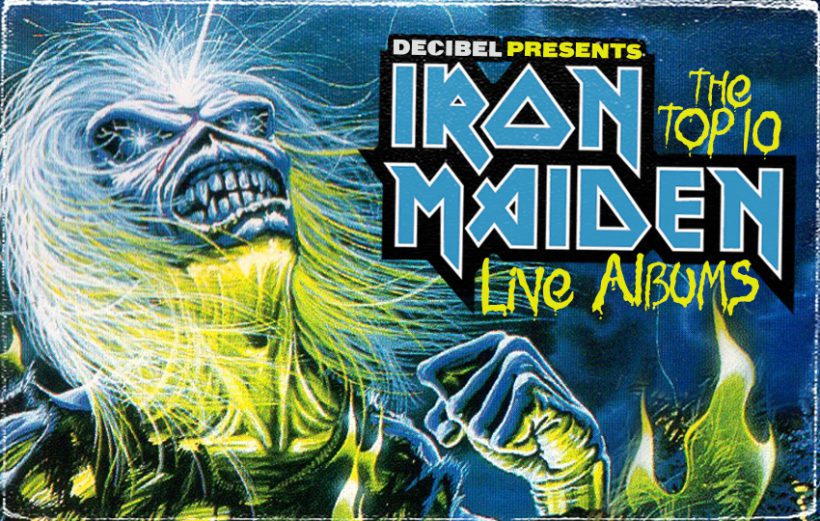 Iron Maiden need zero introductions. The storied heavy metallers have appeared on four Decibel covers (HERE, HERE, HERE, and HERE), but before we were an itch in the crotch of publishing, Maiden ruled, had ruled, and then ruled again pretty much everything we’ve come to hold near and dear in this world. On this Halloween of Halloweens, Decibel lists Maiden’s Top 10 live albums. As Maiden singer Bruce Dickinson once allegedly said, “If heavy metal bands ruled the world, we’d be a lot better off.” We believe that in full.


10. A Real Dead One 1993 EMI
Co-management team Rod Smallwood and Andy Taylor must’ve inverted the focus group survey for A Real Dead One, right down to the title. By the ’90s, Iron Maiden were gasping for air, and that’s no more obvious than on the Fear of the Dark Tour (’92) and Real Live Tour (’93), from which this material is culled. Dickinson, in particular, sounds as if he couldn’t care less, which makes sense since he left his long-time hitmakers in ’93 for a slew of lauded solo albums.

9. Live at Donington 1993 EMI
Originally on VHS, Live at Donington captures Maiden at Castle Donington on August 22, ’92. Essentially, this A Real Dead One, but slapped with a sub-par “bootleg” cover and an equally flat performance. Maiden pulls out the hits like “Hallowed Be Thy Name,” “Running Free” — featuring then exed guitarist Adrian Smith — and “Can I Play With Madness?” with all the fervor of a band ready for the sunset. They weren’t but the early ’90s weren’t lighthouse years for the Brits.

7. The Book of Souls: Live Chapter 2017 Parlophone
Producer Tony Newton (KK’s Priest, Voodoo Six) got the call to record Maiden while Kevin Shirley was likely already ensconced with Joe Bonamassa and Paul Gilbert. Also of note: this was the first tour — the The Book of Souls World Tour — after Dickinson had recovered from throat cancer. Most of the material is logically pulled from the over-long Book of Souls effort, but it’s “Powerslave,” “Wrathchild,” and “Wasted Years,” this one taken from their Rio de Janeiro show in 2016, that pull this largely unnecessary endeavor out of the release “pipeline” gutter.


6. Flight 666: The Original Soundtrack 2009 EMI
Something about the Somewhere Back in Time just felt right. Maiden were as peerless as they were in the mid-’80s, with “The Trooper,” “Two Minutes to Midnight,” “Aces High,” and “Revelations” coming across as particularly inspired. Though, I must admit, “Rime of the Ancient Mariner,” is the coup de grace. Yes, Dickinson flew — literally — the Ed Force One from gig to gig, and that is just as insane as any of the ridiculously large stage setups the band had at any point in the ’80s, ’90s, and ’00s.

5. Death on the Road 2005 EMI
This one might place higher if it wasn’t for the goofy Melvyn Grant cover art. Unlike most Maiden live albums, Death on the Road snaps the Maiden sonic picture in Germany while the Brits were on the Dance of Death Tour (remember that inexplicable Dave Patchett cover?). As usual, the hits are rolled out on a red carpet but it’s the more modern era tracks — the curt “Rainmaker,” the super-great “Brave New World,” and “Paschendale” — that sing praises of the band in their 28th year.

4. En Vivo! 2012 EMI
En Vivo! smashed charts in nine European countries upon its release on March 23, 2012. Wrestled into existence by Banger Films during The Final Frontier World Tour at Estadio Nacional in Santiago, Chile on April 2011, this must-have Maiden live album jams through almost two hours of Maiden favorites. “The Wicker Man,” “The Evil That Men Do,” “Satellite 15,” and of course, perennial favorite “Hallowed Be Thy Name” are energized and recall the reason we adore Maiden on stage and off in the first place.

3. Rock in Rio 2002 EMI
Brave New World got the world excited for Maiden again. Rock in Rio, caught in front of a mammoth 250,000 people, saw the return of Dickinson and guitarist Adrian Smith. And while they kept the gymnastics of guitarist Janick Gers, having Smith and sideman Dave Murray together again was too good to be true. Hell, even Blaze Bayley-era songs “The Clansman” and “Sign of the Cross” managed to pass around the velvet rope of “Wrathchild,” “Iron Maiden” and “Run to the Hills.” The cover art’s — uncredited, of course — could use a facelift, but that’s minor peanuts.


2. Nights of the Dead, Legacy of the Beast: Live in Mexico City 2020 Parlophone
One night in Mexico on the Legacy of the Beast Tour, Maiden explode into their 44th year — yes, 44 years! Though the crowd size paled in comparison to the Rock in Rio gig — a 70 percent decrease, in fact — this is one of Maiden’s best live albums. Actually, 70,000 people ain’t no joke for metal in 2019 (when this was recorded). The Brits put together 100 minutes of high-flying, horns-throwing tracks that pinnacle at the opening with “Aces High” and re-summit the apex with the 11-minute “Sign of the Cross.”

Or… wait, is it really the Top 11 Iron Maiden Live Albums? Yes, we’d have to hang up our Eddie Halloween costumes and tear up our Eddie “breakthrough” door posters if we didn’t list the inimitable Live After Death as our #1.


1. Live After Death 1985 EMI
There’s no way on God’s green earth that Live After Death isn’t our actual #1. Sure, Decibel tried to pit Priest’s Priest… Live! against the Maiden milestone (HERE), but it’s obvious Maiden prevailed. The Hall of Fame-ish cover story on Live After Death is still available (HERE). Nothing I could say here will top that tale.