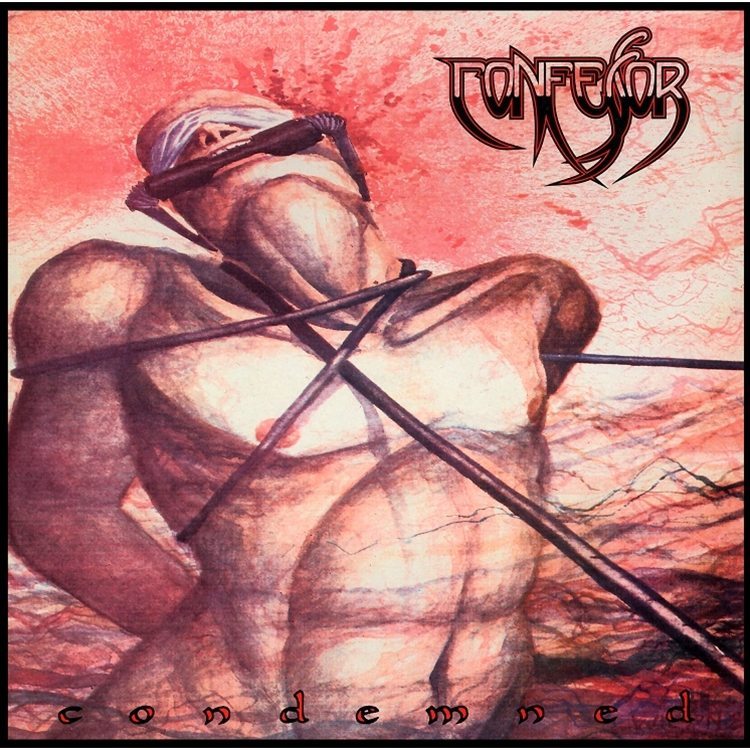 26 years plus a few weeks ago, the phrase “technical doom” was uttered for the first time by a confused hesher somewhere who had bought Confessor‘s Condemned debut for the same reason we all bought Confessor’s Condemned: Earache Records put it out, and it was 1991, so that meant it must be good and is most likely death metal.

But to our confused ears, it sounded more like Axl Rose fronting Trouble playing backwards at 45 RPM.

“We went out on the Gods Of Grind tour with Carcass, Cathedral, and Entombed,” vocalist Scott Jeffreys told me in an interview for Brave Words and Bloody Knuckles in 2005, talking about some of the difficulties the band faced because of their unique sound. “Then we went back out in Europe with Nocturnus. Then after we came back from that, there were just some things going on with Earache and we weren’t really seeing eye to eye on things. I think they really didn’t know how to market us; at the time there weren’t any bands like that [laughs].”

Jeffreys is kinda wrong about one thing: there still wasn’t any bands like Confessor in 2005, and there isn’t today. They occupy a wholly individual place in the history of extreme metal.

And, holy shit: the drumming. The singing. The riffs. More on all that later. Actually, no: more on that now. Steve Shelton plays drums for Confessor (who are still a going concern), and, man, does he ever play the drums. When you bring up Condemned while having a couple beers with another longhair, it’s always, every single time, immediately met with a reaction somehow related to the insane vocals. That’s understandable—they are one of a kind—but I always find myself almost defensively, irrationally, interjecting, “Yeah, and the drumming?! Holy shit!” Because I want more people to talk about Shelton’s drumming, which on this album, is unreal, and, importantly, is incredibly unique.

The man rarely kept a straight beat for more than a few snare hits before moving on to the next off-kilter rhythm, the strange and awesome production sound on the kick drum and toms only accenting all that prog-guy stuff he’s doing back there, stuff which shouldn’t work, but does.

And, can we take a minute to acknowledge that the fade-in (!) drum intro (!) to the title track is a moment of absolute brilliance; whoever made that decision, please buy yourself a few beers and send us the bill. You deserve it.

Alright, now we can address Jeffrey’s singing, which is what most people remember this album for. Considering that the music was somewhere between doom, death, and prog, it was completely out of left field for Jeffreys to employ the sound he did, which was balls-out, frantic, high-pitched wailing. I mean, dude was in Watchtower for a stint, to give you an idea of where he’s coming from.

“The lack of melody in the music made me feel like I had to scream over it,” Jeffreys told me in 2005. “The old material, where there’s not a melodic guitar part, and it’s just numbers, what are you going to do over that? It was also the types of vocalists I was listening to at the time. I was listening to King Diamond, Fates Warning, that kinda thing.”

In opener “Alone,” which is just an absolute classic, crusher of a doom song, Jeffreys stunned Earache Records fans and left them totally and completely alienated within the song’s first 30 seconds. By the time he climaxes from 2:22 to 2:34 in “The Stain” (see below; it’s a fantastic moment, Jeffreys clearly pushing himself to just this side of the edge of his capabilities), it’s clear that a) he has an extremely strong set of lungs and b) this is totally haywire: doom/death should not have vocals like that. And, yet, here we are, conceding that it absolutely rules.

And, in all seriousness, Jeffreys conveys more emotion and sincerity through his vocals than 100 Cookie Monsters could, his performance on this album one for the ages, his pipes propelling Condemned to a whole other level.

But what’s an octopus drum performance and a lunatic vocalist without the riffs to back them up? Condemned has riffs; good lord, does it have riffs. Clearly worshipping at the altar of Trouble, the band should be mentioned when talking about doom royalty like that band, Sabbath, or Candlemass. The fact that they’re not is totally confounding when listening to the riffs all over this album, which drip with an intensity and a headbangability that rivals any of those bands.

But there’s more to the riffs than intensity and headbangability (okay, fine, you got me: not a word), because most bands can fudge their way through those two things. Condemned has an enormous amount of riffs that have feeling, that have a quality that is as stately and majestic as the greatest metal riffs of all time. Check out the aforementioned classic album opener “Alone” and bask in its riff-laden glory:

Confessor split up before they had a chance to record a follow-up to this album; they have released a handful of other releases, including the long-awaited, and quite good, follow-up, Unraveled, in 2005. But Condemned is the one that this band will be remembered for, partially because of the confusion it brought on at the time of its release, during death metal’s boom, on a huge death metal label, but also because of its sheer majesty, its huge riffs, its astounding drumming, and its powerful vocals.

Members of Nile and Carcass, as well as Phil Anselmo, showed up to pay tribute to the band in the liner notes of their 2005 Sour Times EP, and that’s saying something, as is the fact that this band’s sonic blueprint is all over Meshuggah’s jittery guitar work. The sounds Confessor introduced to the metal world on this album aren’t for everyone, but the ones who get it will never forget.

Guitarist Ivan Colon died in 2002, so Condemned will never be inducted into our Hall of Fame; however, let the record show that this album is extremely Hall of Fame-worthy, the band’s willingness to do things their own way and to lay down incredible metal while doing so ensuring Condemned will never be forgotten. (Although our own Chris Dick doesn’t exactly share my enthusiasm for the album.)

Now, because nothing in this world makes sense, here is footage of Confessor playing to no one at a waterpark in 1988; when our civilization has burned itself to the ground, may this footage be shown to the next as an example of how we tried our hardest, but nothing really worked out.