We normally dig deep for this column, but this time around the rockers over at Hells Headbangers delivered the goods to us in the form of this new reissue of Black Death’s self-titled album. This 1984 record was already on our radar, so we figured it was a perfect chance to check out this interesting piece of metal history. 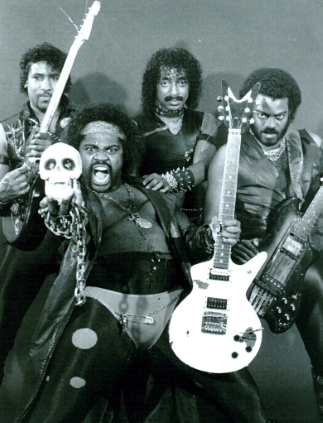 The album starts off promising enough, with “Night of the Living Dead,” a song that borders Cirith Ungol with its thespian leanings, although it rocks simpler and harder than that band usually let themselves, and the sound works. Black Death prove out of the gates here that this is going to be a ragged and loose but dramatic affair, and it is, and one that has a surprising amount of originality for a mainly forgotten album from 1984.

I wasn’t sold on this when I first heard it, the vocals not quite there, the guitar work also reaching but not quite grabbing, but the charm is in the heart, and there’s more of that to come.

Next song “The Hunger” brings even more majesty to the proceedings, the band getting away from the late-night city-fight vibe of the first song to a place where castles abound and so do guitar solos, the guys laying it on thick here, again, with that theatrical style, and a thick, lovable groove.

Now, the album is fun and historically important, but it doesn’t mean every song is good. Take the ill-advised “When Tears Run Red (From Love Lost Yesterday),” a slow-burning dirge-ballad that works on paper (good build-up, nice songwriting smarts) but, despite a truly admirable attempt by everyone, falls short, and kills the flow of the album pretty good here at song three. “Fear No Evil” has a hysterical vocal performance that channels early Halford minus the complete awesomeness that comes with it, but it’s still a blast to listen to (seriously, this guy GOES for it); “Scream of the Iron Messiah” rides the horse’s gallop to Valhalla. There’s a stumble or two, but they get there.

“Streetwalker” and “Black Death” end off the seven songs here that make up the original album. “Streetwalker” is a six-and-a-half-minute atmosphere builder, the band taking their time to get to the song proper after a killer intro, the Maiden-esque track again showing what Black Death were capable of. “Black Death” is the band at their most sinister, the song, which clocks in at 9:18, the most evil of all the songs on here, the guys trudging through the swamps of trad metal, stopping off at schlocky horror along the way, to end off the album with style.

This reissue also contains the band’s two-song 7”, featuring the songs “Here Come the Wrecking Crew” and “Retribution.” “Wrecking Crew” finds the band getting faster and looser than anything on their album, the song coming across like AC/DC on speed. “Retribution” keeps the rocking levels high with its speedy gallops, a great way to end off this release.

Black Death are a significant band in the history of metal, something we at Decibel take very seriously, and this reissue shows that they rocked pretty hard, too.

Do I need to be stoned to listen to this?: Nope. Actually, you need to be alert and ready to rock hard and fast, so that’s probably a detriment. A cold beer wouldn’t hurt, though.

Heaviness factor: On the upper edge of what was heavy in 1984, at tempos both fast and slow.

Obscura Triviuma: Remember being a kid and watching WKRP (note to those too young to have done that: it’s never too late, and the show fucking rules) and Dr. Johnny Fever often wore a Black Death shirt and we never knew what it was? Well, it’s not this band (it’s a malt liquor), but some internet rumours will try to make you believe otherwise. Other albums: The Until We Rock: The Early Recordings of Black Death collection from March of this year, as well as earlier demos, at least one of which has shown up as a bootleg.

Alright, fine, if you must: Given the general frothing-at-the-mouth intensity and the go-beyond-your-means ambition, let’s go with speed.