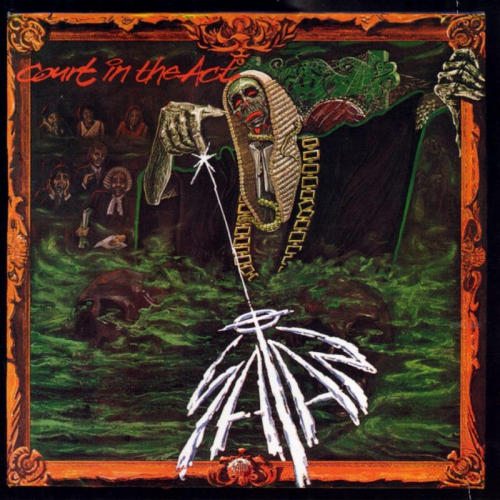 By the time 1983 rolled around, those bands participating within the loose construct known as the New Wave of British Heavy Metal had become well aware that there was more to their scene and sound than playing time-tested and amped-up blues-based riffs in the back rooms of pubs or moldy rehearsal rooms. Iron Maiden were relishing in the success of their first four albums; Def Leppard were on the verge of stratospheric popularity—albeit as a poppier version of their original selves; the larger-than-life Venom had created a genre; and Motörhead were just fucking Motörhead.

And for those bands—as well as the likes of Girlschool, Raven and Saxon—invading other nations (including the storied shores of America) with guitars, drums and amps was no longer a pipe dream. As the number of NWOBHM bands exploded, small handfuls of outfits were making pointed and valiant attempts to separate themselves from the pack. Most notably, Newcastle’s Satan, with their use of off-kilter riffs and rhythms, gothic airraid siren vocals, complicated harmonization and heady topics pertaining to politics, justice and morality. Satan knew they had something different on their hands, and were proud and staunchly brazen about the distance between them and their peers. So much so that they wanted to blaze their own path by avoiding what many of their contemporaries in the Northeast were doing: prostrating themselves at the convenient doorstep of local label Neat, which found itself in high demand after releases by Raven, Venom, Fist, Tysondog and Jaguar.

Satan’s deliberate nonconformity—combined with the naiveté of every band of teenagers ever—served them well in some ways and not so well in others. In 1983, the band delivered the slow-broiling masterpiece Court in the Act, an album that stood outside the wheelhouse of the four-on-the-floor thundersticking typical of the NWOBHM, with the groovy shuffle of “Blades of Steel,” the apocalyptic “Alone in the Dock,” and the offbeat proto-thrash of “Break Free” mixed with involved instrumentals (“Dark Side of Innocence,” “The Ritual”) and ale-in-the-air anthems like “Hunt You Down.”

Widely recognized as a high watermark of ’80s metal today, Court in the Act was initially embraced mostly by a small circle of musicians, diehards and those looking for more from the heavy metal of the day. Not so much the press, which, back in the pre-internet days, was the dominant gateway for the discovery of new bands. A viciously negative review in Kerrang!, the biggest rock/metal magazine in the U.K. at the time, demonstrated the power of the pen, and had devastating ramifications on the mental state and creative direction of what was actually one of the most innovative bands to ever emerge from the NWOBHM. As time has ticked along, Court in the Act has shaken off those shackles to create its own history and become recognized as a stone cold classic that the band—vocalist Brian Ross, bassist Graeme English, drummer Sean Taylor, and guitarists Russ Tippins and Steve Ramsey—always knew it was. The veteran quintet continue to add A-1 material to their legacy since the Court in the Act lineup reformed in 2011, so we gathered the lads for induction into our hallowed hall, a ceremony that Kerrang!, circa-1983 would be astounded to know is happening.

Got to get more Satan? To read the entire seven-page story, with featurings interviews with all members from the Court in the Act album, purchase this issue from our online store, or digitally via our app for iPhone/iPad or Android.