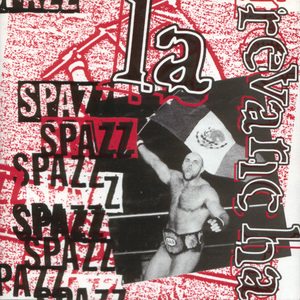 The setting: the San Francisco Bay Area. The era: the mid-’90s. The sound: the violent and harried subgenre of powerviolence, going over with the natives like a wet fart in a dry church. The recycled and enduring cliché you always hear thrown around about a band being “too ‘this’ for ‘that,’ but not ‘that’ enough for ‘this’” is a frustrating reality for Spazz, except they’ve found themselves in a position of being too hardcore for both the metalheads and what’s become of the local hardcore punk scene.

The Redwood City-based trio of Max Ward (drums/vocals), Dan “Lactose” Boleri (guitar/vocals) and Chris Dodge (bass/vocals) first kicked into high gear in 1992 with an abrasive and brutal brand of rapid-fire hardcore that assaulted all borders of death, thrash, grindcore and punk. It was full-blown crossover without sounding like crossover that was further swept under the “no-no” rug by their insistence on doing their thing with a snarky, snotty sense of humor injected into cantankerous fastcore with lyrics that disparately described the minutiae of their daily and personal lives. It was like a Seinfeld episode plopped down into the middle of a particularly rowdy VFW mosh pit. And it made people uncomfortable because they didn’t know whether to laugh or rage. Unwritten scene rules dictated that both couldn’t be done simultaneously.

By the time 1997 rolled around, Spazz had a healthy collection of splits and EPs, as well as a full-length entitled Dwarf Jester Rising, under their belts. From the outside looking in, the band was often viewed as a curiosity, if not an all-out joke; they barely played live, got a cold shoulder from the locals when they did, and preferred to hone their craft in the confines of shitty rehearsal spots in shitty neighborhoods in the name of personal satisfaction. It was this laser-sighted focus that saw them emerge from the Bay Area with second album, the storming La Revancha.

On the surface, the record falls into a warm embrace with powerviolence: short songs; speed/sludge dynamics; suffocating back-to-back-to-back song sequencing. True to form, however, irreverence spilled over the sandbags in droves. The album brimmed with a lighthearted attitude, banjos, ukuleles and saxophones were included, and instead of the usual “war is hell” and “world is shit” samples, there were thoughtfully-littered skateboarding and kung-fu flick excerpts. The cover screamed, “Whiskey Tango Foxtrot?!” and there’s even a guest rhyme throwdown by rapper Kool Keith (Ultramagnetic MCs, Dr. Octagon) coloring “Camp Chestnut.” It’s these little things that make a difference and stamp La Revancha with a sense of personality, iconoclasm and individualism; the sort of thing that has us welcoming it with open arms into our Hall of Fame.

Hard rock heroes Clutch walk away from major labels and make their own mark with mid-career landmark Blast Tyrant.

Shai Hulud – “Hearts Once Nourished With Hope and Compassion”

Read the making of the “post-” with the most EP from the mysterious Mare.