Almost every band has that album: you know, the critically and/or commercially reviled dud in an otherwise passable-to-radical back catalog. Well, every Wednesday morning, a Decibel staffer or special guest will take to the Deciblog to bitch and moan at length as to why everybody’s full of shit and said dud is, in fact, The Shit. Today’s submission is our first from an actual musician, although it’s not about his band. Former Deciblog tour diarist extraordinaire Heath Rave of Wolvhammer gives a shout-out to Pantera’s Power Metal.
You know, this is what it is: Some of us were in high school during this time; some, like myself, were in fifth or sixth grade or right around junior high school, but I’m guessing I heard Cowboys From Hell right around sixth grade, after seeing the “Psycho Holiday” video on MTV and thinking Phil’s Last of the Mohicans haircut was pretty fucking badass. Didn’t know what to think of the fat drummer—still sort of don’t—but that’s neither here nor there. I got that shit on tape and found that my favorite song on there was “Heresy.” Not “Domination,” not “Primal Concrete Sledge,” but fucking “Heresy,” dude. You know the one: it sounds like he’s screaming “Hershey.” At least that’s what my buddy Dan Baker and I thought.

Anyway, seventh grade rolls around. Out comes Vulgar Display of Power. Holy shit! These dudes got tough! Like, these dudes are real fucking badasses! Oh wait, is the jock from my shitty high school in my shitty farm town in South Dakota wearing a Pantera shirt? Goddammit, I can’t get the taste out of my mouth. And as retarded as that mindset is, when you’re 13, some shithead football/basketball/track all-around douchebag who called you a metal faggot and told you to skate or die is not allowed to like my shit. So, I bought a Morbid Angel tape and never looked back.

Far Beyond Driven: Meh. Boring. Props for the Eyehategod and Crowbar shirts, Phil. Your drummer’s even more of a lardass and every hick shitkicker in my town is blasting this out of their giant trucks. Good job on that #1: that just means you made metal for stupid people.

So, around this time, I get to meet some older friends in the bigger city north of my town, and I end up getting to fill in on the metal night at the college radio station there purely by coincidence and a suggestion from a friend. They didn’t care that high schoolers did it
since all the college kids thought it was pretty lame to do a radio show. I was fucking stoked. Anyway, I’ll get to the point here—being sick is making me rambly. I’m going through the head dude of the metal night’s CD collection, and lo and behold, I’m like, “What is this Power Metal thing from Pantera?” He’s like, “Well, technically, it’s their fourth record.” Bullshit. Then he gives me the rundown. I had no idea. He gives it to me thinking I’ll have a good laugh. It wasn’t funny. It was deadly serious. 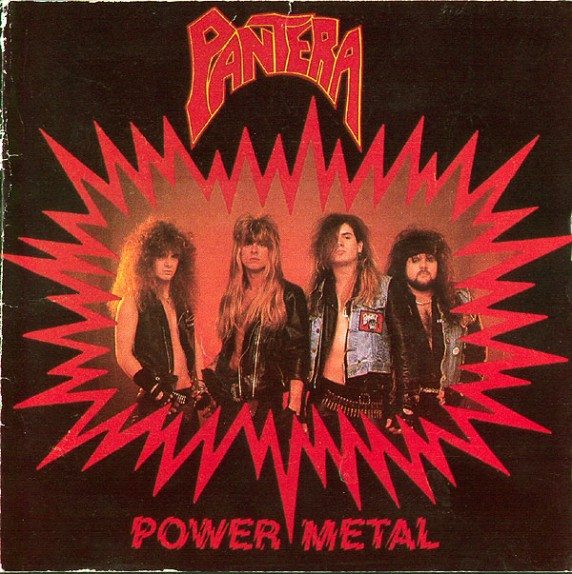 Right out of the gate with “Rock the World,” these dudes are screaming for vengeance as hard as they can right into the title track, just painkiling it in the hardest Judas Priest style they can muster. Now this is what I’m talking about. By the time “Over and Out” and “Down Below” hit, I’m fucking sold. This is the kind of shit my sister showed me when she introduced me to metal. It was thrashy, technical, and had just enough glam sleaze on it to make way more dangerous than that tough-guy posturing bullshit of the last decade. This shit was for drinking, drugs and driving your car fast. Not for beating up gay dudes ’cause you’re afraid you’re gay yourself…

Speaking of that. Look at the cover. HOLY SHIT!!! How did Phil predict the haircut of so many jerkoffs in the 2000’s??? Is he psychic? And tubby, you’re looking good—can’t button that shirt all the way up, but goddamn, that Aqua Net is really helping. I’m guessing that was the Bear look in the ’80s. Shit, Dime’s all to the side cause they were afraid of his hair—it looked so damn good.

And how can you deny a song called “Proud to be Loud,” co-written with the impeccable Mike Ferrari of Keel fame. “We’ll Meet Again” is the best stripper jam that none of us will ever get to see danced to in a shitty strip club while doing coke off of some lame Caesarian bitch’s fake tits, ’cause you know it’s just not the ’80s anymore, and frankly, none of this shit is dangerous now. None of it—fuck, Varg’s a fucking farmer now. I’ll take some Sunset Strip sleaze rock any day over some of the shit that’s force-fed as metal now. Remember real biker gangs? No you don’t, cause you’re probably 15 if you’re reading this and trolled some messageboard saying my band isn’t “tr00” or “kvlt.” Guess what? We’re not, and I like cock rock.

Speaking of rock for my cock, how about “P*S*T*88”? That stands for PUSSY TIGHT 1988. Goddamn I’ll bet it was back then. That song speaks for itself. And I can’t go away without mentioning the fact that this shit record singlehandedly holds the greatest ’80s movie montage song ever that never got used in an ’80s movie. Put on “Hard Ride” and tell me you can’t see Ralph Macchio or Jean Claude Van Damme learning two months’ worth of karate in less than three minutes. Fuck it, I’m buying a fucking Firebird today. With T-tops.